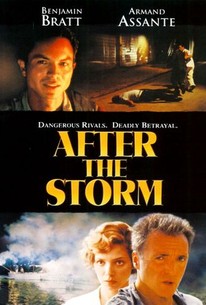 After the Storm Photos

Adapted from an Ernest Hemingway story by Hemingway's longtime friend and associate A. E. Hotchner, After the Storm spent years in development before filming of the movie version began in 2000, several years after Hotchner's death. Set in the Bahamas in 1936, the story concerns a young fisherman on the lam from gangsters, who stumbles upon a fortune in jewels from a yacht sunk in a recent storm. This sudden windfall results in nothing but unhappiness and betrayal for the fisherman -- and for everyone else who embarks upon the treasure hunt that consumes most of the action. When After the Storm failed to secure a theatrical release, it was licensed to the USA network for its first American TV showing. The R-rated video version was released on May 29, 2001.

Nancy Sinclair
as Woman at Bar

Critic Reviews for After the Storm

As tedious as watching other people scuba dive.

Audience Reviews for After the Storm

There are no featured audience reviews yet. Click the link below to see what others say about After the Storm!

After the Storm Quotes