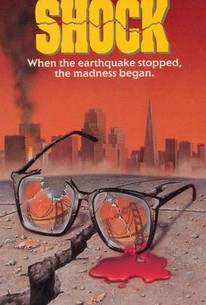 A welcome exception to the slasher-stalker-kidnapper films usually seen on the USA cable network, After the Shock is a tribute to the courage and heroism of Bay Area residents following the San Francisco earthquake of October 17, 1989. Director Gary A. Sherman opts for a "cinema verite" approach, utilizing a hand-held camera to recreate the style of the original on-the-spot TV reporting. The cast includes Scott Valentine, Rue McClanahan, Yaphet Kotto, Jack Scalia and Richard Anthony Crenna as various firefighters, paramedics, law officials and private citizens. One of the best performances is offered by Nick Zaninovich, a real-life quake survivor who spent seven hours trapped in his car, which was buried under a collapsed stretch of the Nimitz freeway. After the Shock debuted September 12, 1990.

Bob Roitblat
as Off Duty Policeman

Sasha Jenson
as Teenager
View All

Critic Reviews for After the Shock

There are no critic reviews yet for After the Shock. Keep checking Rotten Tomatoes for updates!

There are no featured reviews for After the Shock at this time.

After the Shock Quotes