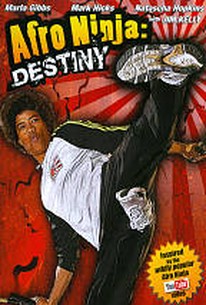 An action comedy in the tradition of Jackie Chan and Bruce Lee, Afro Ninja: Destiny follows the journey of a hapless hero who's transformed into an unstoppable warrior after receiving an ancient magical sword. YouTube sensation Mark Hicks stars as Reggie Carson, a longtime martial artist who has just become the laughing stock of the entire internet. The joke is on the bad guys, however, when Reggie transforms into the formidable warrior known as Afro Ninja after coming into possession of a mystical sword and growing an instant afro haircut. Now, as gangsters move into his neighborhood to spread greed and corruption, it's up to Afro Ninja to keep the streets safe. Marla Gibb, Jim Kelly, and Natascha Hopkins co-star.

If Youtube-inspired flicks are a new trend, can spin-offs of Tay 'Chocolate Rain' Zonday and Chris 'Leave Britney Alone!' Crocker be far behind?

There are no featured reviews for Afro Ninja at this time.