The Adventures of Pluto Nash2002 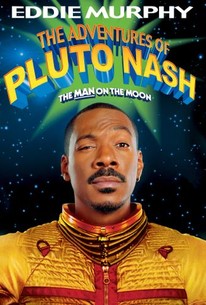 Critics Consensus: The Adventures of Pluto Nash is neither adventurous nor funny, and Eddie Murphy is on autopilot in this notorious box office bomb.

Critics Consensus: The Adventures of Pluto Nash is neither adventurous nor funny, and Eddie Murphy is on autopilot in this notorious box office bomb.

Critic Consensus: The Adventures of Pluto Nash is neither adventurous nor funny, and Eddie Murphy is on autopilot in this notorious box office bomb.

The Adventures of Pluto Nash Photos

Eddie Murphy gets way, way out in this futuristic sci-fi comedy. In the year 2087, the Earth's natural resources have been largely depleted, and an increasingly large number of people have taken up residence on the moon, where the pioneering attitude of the new residents has created a culture not unlike the old west. Pluto Nash (Eddie Murphy) is one such lunar exile who formerly made his living outside the law, but has since gone straight and now runs the hippest nightclub in the moon colony known as "Little America." Pluto is approached by Mogan (Joe Pantoliano), a gangster who wants to buy the nightclub; Pluto has no interest in selling, but it seems Mogan isn't about to take no for an answer. Pluto also discovers Mogan is in cahoots with Max Crater, a crime boss whose goal is to take over the entire moon. The Adventures Of Pluto Nash also features Randy Quaid as Pluto's robot bodyguard, Rosario Dawson as a naive singer who has just arrived on the moon, Peter Boyle as Rowland the pool hustler, Jay Mohr as old-school lounge singer Tony Francis, Illeana Douglas as a cloning technician, and Pam Grier as Pluto's mother.

Miguel A. Núñez Jr.
as Miguel

News & Interviews for The Adventures of Pluto Nash

View All The Adventures of Pluto Nash News

Critic Reviews for The Adventures of Pluto Nash

The result is something quite rare in professional show business: 1 1/2 hours of pure blankness. It's there but it's not there. It is but it isn't. It has nothing to offer. It's not forgettable, really, because there's nothing to forget.

Formulaic films are released every week, but it's rare that one has a $100 million budget, big stars whose roles are embarrassing to watch and unusual special effects that only serve to mask a predictable plot and cliche-ridden scenes.

A paralyzingly dopey mess, Pluto sat on the shelf for more than a year while Warner Bros. tried to inject some life into it. You might as well try to revive a stuffed moose.

Forensics experts will be digging through the rubble of this fiasco for a long time, trying to reconstruct the accident. How did so many lines fall flat? Why were the action scenes so corny and unconvincing? Who put the stink on this?

Even the gang from Mystery Science Theater 3000 would have trouble finding much to riff off in this turkey, which is unremittingly dull more than anything else.

It's one of those classically awful movies that you almost have to see to truly appreciate why it well deserves its status as one of the worst movies of all time.

Complete with a Xanadu-style dance routine, Pam Grier as Pluto's mother indulging in tired blaxploitation moves and rent-a-cameo John Cleese as a virtual reality chauffeur, this is a flop of epic proportions.

It's a weak effort that amounts to a universal waste of talent and time.

Audience Reviews for The Adventures of Pluto Nash

Being one of the worse box office bombs ever isn't a good start really is it. Yet to look at the trailer, the sci-fi fantasy aspect and the films title you could be fooled into thinking this might not be too bad. The title is pretty sweet if you ask me, definitely an 80's movie title right there. The plot is set in 2080 and mainly on the moon which is now called Little America. A location where gambling, girls, criminals and all things seedy are rampant, a bit like Las Vegas in the old days. Eddie Murphy is a retired smuggler who runs a nightclub on the moon and wants a quiet life, but this is all messed up when some goons come along and force Murphy out by destroying his club under the orders of a mysterious kingpin. Its now up to 'Pluto Nash' to find out why, who is the man behind it all and try to get his club back, or what's left of it. I think the first issue with the film are the visuals. The film is oldish but not that old and unfortunately the CGI effects are pretty poor. Shots of the moon, moving vehicles, the lunar surface and of course Little America just look average and obviously CGI. When we close in on the urban areas the sets aren't too bad in design but again its terribly obvious its all sets. It all looks like a very mediocre attempt at a 'Blade Runner-esque' grimy neon lit urban district. The colour palette doesn't really help with everything being grey and boring, yes I know its the moon and the moon is typically grey but come on. There were some nice 50's-esque designs on some buildings and vehicles though, there was that element throughout the film but it still felt drab and lifeless, virtually black and white. Then you have all the interior sets, design and costumes...its all grey!! everything is grey! flippin' eck!. Not only that but the interior designs look so dated, like its all been reused from a 60's TV sci-fi show. I understand that doesn't necessarily make it bad, there are plenty of examples where films have deliberately gone down the homage route or retro design/vibe which can work wonders giving a great charm factor. The problem here is the film had a massive budget and you wonder what they actually used it on. Take the robot character played by Quaid (and the maid robot character). What they have done is simply apply a lot of makeup to Quaid to give him a doll-like appearance, then he merely acts out the robot role. Now again this can be done and it can work but probably best in low budget films that have little choice. In a big production it just tends to feel lackluster, the maid robot was the same but dressed up in a sexy French number as if that makes it more acceptable. I did quite like the 50's sci-fi sense I got from Quaid's robot though, like a butch Robbie the Robot in human form...kinda hehe. Whilst watching I also found the plot to be a tad confusing really, or at least it didn't make much sense because it was all a muddle of grey. There are a lot of character names flying about here, a lot of seemingly pointless stuff, aimless boring dialog and not much action believe it or not. We just move from one cheap looking grey set to the next with little to laugh, disappointing seeing as its supposedly a Murphy sci-fi action romp. But is it? you think it is but its not really, its more like a 1950's nightclub murder noir homage, 'Harlem Nights' in space perhaps. I must admit to thinking of 'Total Recall' at times whilst watching, it has that kind of vibe going on, minus all the excellent action and blood of course. Do I get the feeling this was made and acted the way it was on purpose?...was it?! I'm not sure, I'd like to think that but deep down I really doubt it. I just think it was a poorly executed movie which had potential to become a bit of a classic. I can see why people might enjoy bits of it like Quaid's cheesy robotic performance and the minor visual gags dotted throughout, but end of the day this really feels like its trying to achieve what 'The Adventures of Buckaroo Banzai' achieved. I'm still not really sure whether or not this film was intentionally made like a low budget sci-fi B-movie for artistic reasons, or it just came out that way. The more I think about it, this might have worked much better as a short TV series, it certainly has the look and feel.

Y'know, this isn't a good movie, but it really isn't all that offensive. It's notorious for being the biggest flop ever but when you go into it expecting it to suck harder than anything else in the history of time it's pretty easy to find something to like about it. So at least it was somewhat original in presenting a vision of the future. Not that I laughed. Not a single time. It was supposed to be a comedy right? Also Rosario Dawson is continually likable so.

This Movie was tiny bit stupid.

The Adventures of Pluto Nash Quotes