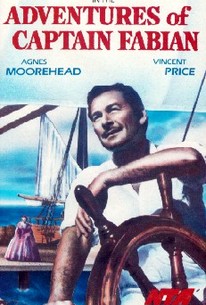 La Taverne de N.O. is the French title for the Franco-American costume drama Adventures of Captain Fabian. As sea captain Michael Fabian, Errol Flynn (who also adapted the screenplay from the Robert Shannon novel Fabulous Ann Madlock) is ostensibly the star. Most of the footage, however, is devoted to Micheline Presle as servant girl Lea Marriote, whose thirst for revenge against the prominent New Orleans family who wronged both her and Fabian motivates the film's plotline. After Fabian defends Lea on a murder charge, she promptly weds George Brissac (Vincent Price), scion of that aforementioned family, thereby laying the groundwork for a spectacularly unhappy finale. Filmed in Paris and Nice, La Taverne de N.O. represented the second film which Errol Flynn made in partnership with producer-director William Marshall; the first was the abortive Hello God.

Aubrey Bower
as Mate
View All

There are no critic reviews yet for Adventures of Captain Fabian. Keep checking Rotten Tomatoes for updates!

There are no featured reviews for Adventures of Captain Fabian at this time.