The Adventures of Baron Munchausen1989

The Adventures of Baron Munchausen (1989) 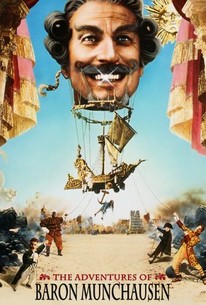 The Adventures of Baron Munchausen Videos

The Adventures of Baron Munchausen Photos

The tale of the enchanting adventures of Baron von Munchausen on his journey to save a town from defeat. Being swallowed by a giant sea-monster, a trip to the moon, a dance with Venus and an escape from the Grim Reaper are only some of the improbable adventures.

Peter Jeffrey
as The Sultan

Robin Williams
as King of the Moon

Tony Smart
as Gunner
View All

News & Interviews for The Adventures of Baron Munchausen

View All The Adventures of Baron Munchausen News

Critic Reviews for The Adventures of Baron Munchausen

The sheer volume and invention of Gilliam's visual largess sets him apart, and his wit operates for the most part at a dangerously sophisticated level.

One of the most voluptuously beautiful films ever imagined, Munchausen naturally assumes that surrealism is preferable, that through make-believe we find the way to true beliefs.

A lavish fairy tale for bright children of all ages.

The king is completely out-of-control, and so was Gilliam in making this film. Neither has much of a sense of proportion, but both are hard to ignore.

There is much to see on this journey, all of it presented in the abundant, deep-focus detail that is Gilliam's visual trademark.

A fitting final installment in Terry Gilliam's trilogy begun with Time Bandits and continued with Brazil.

The Adventures of Baron Munchausen is a fairy tale of large heart and limitless vision. Like its maker, it staunchly defies the exigencies of reason to pursue a bigger vision of imagination.

Superbly photographed and marvelously lighted, this remarkable set piece of art direction and stunning decor cures many of its own ills, including a screenplay that meanders grandly.

Its intellectual intent and the physical production seem disconnected, leaving a film that bedazzles the eye even as it bedevils the mind.

It's an opulent odyssey that balances romance, comedy and thrills in one glittering and constantly surprising package.

For a picture big on in-camera special effects, few of the explosions and set pieces can eclipse the parade of cracking performances.

Audience Reviews for The Adventures of Baron Munchausen

Gilliam must be the king of fantasy films, his filmography lists some true cults and this tale of tall stories is no exception. What I find fascinating about this film is the fact its actually based on a real person and what he actually claimed. An 18th Century German nobleman who spoke or boasted of his outrageous adventures whilst at war against the Ottoman Empire. Whether of not this chap was possibly a bit tipsy at time I don't know but its quite amazing to think this man made himself into a bit of a legend through these tall tales. The films plot starts off in the present day of the film and then briefly as a short story told by Munchausen himself. It then leads back into the present day of the film again and carries on as an adventure, presumably the same adventures adapted from the Barons own stories. In short we follow the Baron and a little girl as he goes off to find his close friends so he can then return to this unnamed European city and save them from the attacking Turks. Surreal isn't the word...or maybe it is, as this film is right out there with Gilliam's other bizarre fantasy worlds. Of course the film is based on the novels that recount the tall tales of the real man in question so I'm guessing that what we see is actually the real Munchausen's imagination and Gilliam has just recreated it, with some artistic license I'm sure. What is accurate to the source material I can't say as I have not read the books. So the main plot point is for Munchausen to find his four compadres who are scattered around in this bizarre universe. We follow the Baron as he travels to the Moon of all places, to the South China sea, the belly of a huge sea monster (familiar story line for fairytales) and deep below the Earth in the realm of the Roman God Vulcan. A heavily character driven movie with each little venture being hosted by new outlandish people. I think most viewers may have forget that Robin Williams was in this film as the headless King of the Moon...and oh my is he annoying, yep its that old Williams routine that makes you wanna slap him. I guess he suits the crazy character but it just feels like the Robin Williams show. Another performance that felt a little weird was Oliver Reed as the God Vulcan. I'm not entirely sure Reed even knows he's in a film here, he plays the character as an oafish quick tempered stereotypical British northerner, whilst also coming across like a simpleton and a bit drunk, so that's just an aging Reed then. A young Uma Thurman portrays his wife Venus which stuns you because she was actually pretty back then, doesn't say much though. There are so many characters in this film I couldn't possibly go through them all. Pryce is the perfect choice as the snivelling city official, Eric Idle and Jack Purvis take to this extreme fantasy like a duck to water with all their previous fantasy film/Gilliam experience but its John Neville who steals the show as the Baron. For a start the makeup is brilliant and really captures those typical aristocratic features, they really nail the real life caricature of Munchausen. I also loved that old fashioned gentlemanly lordly performance by Neville, both dashing and flamboyant in his beautiful period attire, sword at his side, elegant facial hair and perfectly pompous wig. One could say a dignified pirate appearance. Its a bit odd how his age keeps changing from time to time depending on the specific escapade they are on but every time Neville looks terrific. It really is quite incredible how he actually resembles some real historic images from the era. The film can't help but look a bit dated these days I'm afraid, for its time the film was top of its game but these days the cracks show. Not to say that dampens your enjoyment of the film, if anything it heightens it and adds to the delightful charm of all you see. There is something about Gilliam films, that unique look that has carried through with other projects like 'Time Bandits' and 'Jabberwocky', its almost crappy looking, obvious effects yet somehow it just works. This film has it all with the added bonus of some lovely period costumes and that wonderful theatre set opening. I must admit the film doesn't quite hold up the wonder it used to have for me when I was but a mere sprog. The fantasy element is excellent and feels more like a traditional fairytale or dream more than anything, not so much like an Indy type adventure. I think some bits work and some don't, the whole Moon part feels a bit stupid in all honesty and I didn't like Reed's God, but getting swallowed by the sea monster is the quintessential time-honoured fantasy fodder that I liked. There are many golden classic images and sequences in this film that have stood the test of time. That along with Neville's grand performance and some sumptuous sets and costumes you can see why this film was nominated for so many awards.

Unmistakably from the imagination of Terry Gilliam, this is a high-spirited whimsical fantasy adventure about an eccentric aristocrat who presents tall tales of his exploits as fact. It's all about the power of imagination and the suspension of disbelief. The film is a dazzling visual delight, but where the narrative is concerned, it's rather shallow. It's also all over the place in terms of coherence. I didn't know what what going on a lot of the time, but due to how imaginative it all was, and how great the look, costumes, and sets were, I didn't really care. The film is definitely a love it or leave it sort of affair, which is pretty much almost always the case with Gilliam's work. Besides looking great, and being all kinds of quirky, it does have a decent cast who gives some sometimes wonderfully over the top performances. John Neville is a delight as the title character ,and a young Sarah Polley shines as the little girl Sally who follows him on his adventures. We also get Eric Idle, Jonathan Pryce, Oliver Reed, and a bizarre appearance from Robin Williams (performing under a different name). For me though, I was really taken by the image of Uma Thurman reenacting Botticelli's Birth of Venus. I'm probably being a little kind of this film, but sometimes I'm a sucker for this sort of stuff, even if I know it really could be a lot better than it thinks it is.

I found this entertaining, amusing, and often rather charming. The sets and costumes are beautiful. The moon segment is the most surreal part in my opinion, and Robin Williams might be too much for some people. Overall though it managed to hold my interest for the full 2 hours rather easily, and it's a film I would have no problem with viewing again, and would perhaps even seek it out for repeat viewing.

"I'm Baron Munchausen! - That sounds nasty. Is it contagious?" I've been waiting to see this movie for a long time but never had the chance.. Until now. Because of the reviews that I've read from people and critics, I was prepared that 'The Adventures of Baron Munchausen' would be something I either love or hate. Strong words, love and hate.. The film is directed by Terry Gilliam, the man behind several hits, for example '12 Monkeys', 'The Fisher King' and several Monty Python productions, so you can expect something extraordinary. The film was a joy to watch. It's a fairy tale that will keep the viewers interest all the way til the end. During their adventure, the Baron and the young girl, played wonderfully by a young Sarah Polley, will be taken all the way to the moon and the belly of a monster fish on their journey to find the baron's old friends. Why, you ask? Well, they gotta defeat the Turkish sultan. A basic plot for any film really... The special effects have not aged that well but some scenes are wonderfully made, especially the moon. The king of the moon, Ray D Tutto or better known as Robin Wiliams, is hilarious to watch. This is the Williams that I remember from my childhood! "I don't have time for flatulence and orgasms!" What I liked about the film was that I got so caught up with the story that I didn't always know if something was real or just a dream. 'Munchausen' is an example on how pure imagination of filmmakers can give us viewers something special, something that really deserves to be seen. By the way, kudos to the cast. John Neville, Eric Idle, Oliver Reed, a young Uma Thurman etc, all do a good job and are simply fun to watch!

The Adventures of Baron Munchausen Quotes