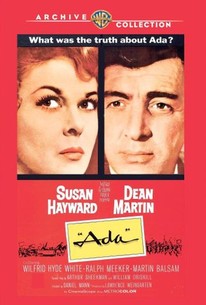 Susan Hayward and Dean Martin throw a wrench into Wilfred Hyde-White's political machine in this Depression-era tale of corruption and power. Plucked out of obscurity by crooked party boss Sylvester Marin (Hyde-White), good ol' country boy Bo Gillis (Martin) is elected governor based solely on smear tactics. Married to Ada (Hayward), an ambitious call girl he met during the campaign, Bo soon discovers he's only a puppet with Marin pulling the stings. So when Ada convinces her husband to stand up and fight back, it leads to car bombings and blackmail as Marin battles the Gillis' for control of the state. Based on Wirt Williams' Pulitzer Prize-nominated novel, Ada was partially inspired by Jimmie Davis, the singing governor of Louisiana, whose campaign song "You Are My Sunshine" is echoed by "May the Lord Bless You Real Good," a tune written especially for the film and performed by Martin.

There are no critic reviews yet for Ada. Keep checking Rotten Tomatoes for updates!

A STAR vehicle if ever there was one. Susie tears it up as a prostitute who somehow ends up governor of a Southern state! Fun in a melodramatic way with Hayward firing on all cylinders, her showdowns with Wilfred Hyde-White are worth watching for alone. Note how every scene in which she appears is geared to making her look her absolute best, all the furnishings and colors of the rooms compliment her appearance over all others.