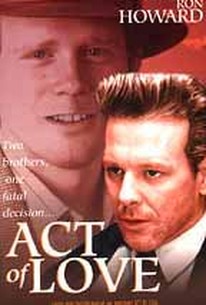 The always-touchy issue of euthanasia has provided source material for films since the silent era. 1980's Act of Love stars Ron Howard as the brother of Mickey Rourke, who has been left paralyzed by a motorcycle accident. Howard kills Rourke with a shotgun, claiming his brother begged him to do it. He willingly gives himself up to the authorities and stands trial, hoping more for understanding than exoneration. Made for television, Act of Love was based on a true story, chronicled by author Paige Mitchell.

Critic Reviews for Act of Love

There are no critic reviews yet for Act of Love. Keep checking Rotten Tomatoes for updates!

There are no featured reviews for Act of Love at this time.