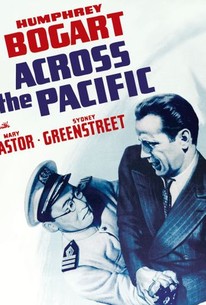 Across the Pacific Photos

Across the Pacific plays like a "rite of passage" between Maltese Falcon and Casablanca. Humphrey Bogart plays an American army officer (named "Rick") dishonorably discharged from the service. Actually his "disgrace" has been carefully arranged by the US government, the better to allow Bogart to investigate prewar espionage activities. While on board a Japanese ship bound for the Panama canal, Bogart makes the acquaintance of Sidney Greenstreet, a Briton with pronounced pro-Japanese sentiments, and Mary Astor, a fashion designer who seems to be harboring a secret (both Greenstreet and Astor were, of course, Bogie's Maltese Falcon costars).Also on board is American-educated Japanese martial arts expert Victor Sen Yung, whose amiable demeanor masks a duplicitious nature. After much chasing about in Panama, Japan and Manila (including a remarkable sequence in a Japanese movie theatre), the principals gather at the Panama plantation of Astor's disippated father (Monte Blue), who is held captive by the Japanese to ensure Astor's cooperation. The spies' master plan is to destroy the Panama Canal (allegedly the script had called for the sabotaging of Pearl Harbor!) The story goes that director John Huston left poor Bogart in an inescapable situation, then left for Washington to work for the government, obliging the actors, the scriptwriters, and new director Vincent Sherman to come up with their own denouement. This story, which improved with the telling over the years, may well have been Huston's easy-out to excuse the ludicrous burst of melodramatics with which the film concludes. Across the Pacific is fun on a nonthink level, though the rapport between Humphrey Bogart and Mary Astor, so vital to the success of Maltese Falcon, seems strained when the actors are required to spew wisecracks.

Roland Got
as Sugi

Philip Ahn
as Informer Inside Theater

Will Morgan
as Officer

James B. Leong
as Nura

Critic Reviews for Across the Pacific

One of the best spy movies we've seen in a long time. [Full Review in Spanish]

Audience Reviews for Across the Pacific

Though a failure for Huston and Bogart compared to it's predecessor (The Maltese Falcon), this political thriller still entertains. Features great performances from Bogart and Greenstreet.

A product of it's time, Across the Pacific was made more for the war effort than for it's cinematic merits. If the cast seems vaguely familiar it's because many of them, including director John Huston, worked together on The Maltese Falcon just the year before. This one is minor league compared to it's predecessor, but it's still replete with Mary Astor's charm and Humphrey Bogart's machismo and that alone makes it worth watching.

bogey and greenstreet work well together once again in this excellent tale of intrigue. the twists are great and the story is told well in what is an underrated classic helmed by the great john huston.

Reteaming of the three major players of the Maltese Falcon yields iffy results, the acting is good of course but the story is somewhat lackluster and uninvolving. An average effort especially from someone like Huston.

Across the Pacific Quotes