Across the Line: The Exodus of Charlie Wright2010

Across the Line: The Exodus of Charlie Wright (2010) 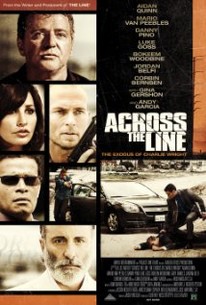 Across the Line: The Exodus of Charlie Wright Photos

The stunning story of the biggest investment fraud in U.S. history comes to the big screen in this high-stakes crime drama starring Aidan Quinn, Andy Garcia, Mario Van Peebles, and Gina Gershon. Shortly after vanishing without a trace, fugitive Los Angeles financer Charlie Wright (Quinn) turns up in Tijuana with $2 billion in cold hard cash. Now it seems that the FBI may be the least of Charlie's concerns. Mexican drug trafficker Jorge Garza (Garcia) is drowning in debt. With his empire on the line and his family falling to ruin, Garza recruits a small army of crooked cops to track Charlie down, and seize his stash at any cost. Meanwhile, an influential Russian mobster is none too happy about being swindled out of his ill-gotten earnings by the smooth-talking grifter, and dispatches an experienced team of mercenaries led by cold-hearted killer Damon (Luke Goss) to recoup his losses, and bring Charlie back to face the consequences of his actions. As the criminals close in on Charlie from all sides, his best hope for survival is to be captured by FBI Agent Hobbs (Van Peebles) first. With his future hinging on the capture of the criminal who once slipped through his fingers, Agent Hobbs becomes determined to smoke out Charlie, and see that justice is served. ~ Jason Buchanan, Rovi

Critic Reviews for Across the Line: The Exodus of Charlie Wright

There are no critic reviews yet for Across the Line: The Exodus of Charlie Wright. Keep checking Rotten Tomatoes for updates!

Audience Reviews for Across the Line: The Exodus of Charlie Wright

I had a mixed reaction to the film. It wasn't what I expected the film to be (that is both good and bad). It reminded me of movies like Traffic and Smokin Aces. There is one scene at the end of the film where there is a stand off between the good guys and bad guys with their guns pointed at each other. That scene reminded me of the famous Tarantino type stand off which is in his movies. The ending of this stand off, I found refreshing. Overall, I thought the film needed a rewrite. It felt uneven. I felt that the film was not focused and balanced right. I also found the pacing to be off at times. The best part of the film are the performances. Aidan Quinn does a great job as Charlie Wright. Mario Van Peebles also shines here as the agent after him. Andy Garcia is great here too. Nice supporting work from Gina Gershon, Luke Goss, Corbin Bernsen, and Bokeem Woodbine. Overall, I would recommend the film, especially cause of the performances in it.

A stunning and powerful thriller. A multi-layered character and story driven film thats packed with action, suspense, style and stars. A great movie. It`s The Line meets Traffic. A brilliant and masterful crime-drama. Director, R. Ellis Frazier a wonderful first feature film, he proved to be a great writer with The Line, now he proves to be a great director with Across the Line. An outstanding all-star cast that all deliver. Aidan Quinn gives a great and strong performance. Mario Van Peebles is excellent. Luke Goss is terrific. Danny Pino is fantastic. Andy Garcia is magnificent, one of his best performances ever. A thrilling, dramatic, tense and very entertaining action-packed film that grabs you and dose not let go for a minute. A bold, moving, utterly compelling and electric piece of work. It keeps you on the edge of your seat and grabs you tightly and has you drawn to every one of these great characters and in depth with its story.

Across the Line: The Exodus of Charlie Wright Quotes