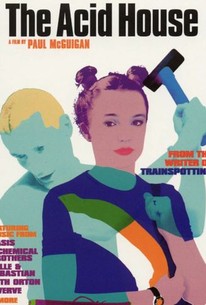 Critics Consensus: Narratively stagnant and stylistically oppressive, The Acid House proves to be a bad trip.

Critic Consensus: Narratively stagnant and stylistically oppressive, The Acid House proves to be a bad trip.

THE ACID HOUSE is a surreal triptych adapted by "Trainspotting" author Irvine Welsh from his acclaimed collection of short stories. Combining a vicious sense of humor with hard-talking drama, the film reaches into the hearts and minds of the chemical generation, casting a dark and unholy light into the hidden corners of the human psyche.

Iaian Andrew
as [The Granton Star Cause]

Morgan Simpson
as Chantel (as a Baby)

Marnie Kidd
as Chantel (as a Toddler)

Billy McElhaney
as Felix the Paramedic

Ricky Callan
as Tam the Driver

Ronnie McCann
as Andy
View All

Critic Reviews for The Acid House

What the three stories do share are solid ideas all dressed up with nowhere to go.

Cheap and unpleasant, yet compelling

If I could give this movie a negative rating, I would.

It's a one-joke film that fails to be amusing almost from the start, and shamefully wastes a talented ensemble cast in such a trite and depressing enterprise.

Audience Reviews for The Acid House

The Acid House is a vulgar and perverted literary adaption, of three short stories, in the Scottish slums. It is loaded with profanity, and makes the viewer feel like trash, just by watching. Coming into the viewing I heard nothing of it, but judging it's negative critical reception, and lack of publicity, it's one of the most underrated films I ever encountered. It was hysterical black humor, and probably the best film I've seen from the nineties. The first story follows Boab, a lazy lump of dirt, who looses everything in a matter of a few hours. After a bar man philosophical meeting with God, he is turned into a fly. The meeting was surprisingly deep, and asks the true question of "why don't we use our powers". As a fly he gets revenge, and sees with the audience a scene of incredible disturbance. Then there's the most emotionally dwelling story "The Soft Touch". A truly caring but naive man, marries and impregnates a whore. Obviously enough she openly cheats on him, and everything goes down, for the man with no escape. The setting was tense, and while the ending was anti-climatic, it was the most well made of the shorts. Finally there's the story that the film invests the most effort into, The Acid House. This was absolutely, the best midnight humor I've ever came across. Dirty, crazy, and makes Trainspotting, look like it copped out. A dope head switches bodies with a newly born baby, and while switch of bodies has become a comedy cliche, this one actually made it work. I laughed eccentrically and it really completed the film, if there's any reason to finish it, here you go. In conclusion I can't explain my love for this film enough. The score and white trash setting put a mood. The small things like the graffiti and the bigger aspects such as the characters all had there contribution. I laughed and could still take the next scene with seriousness. The Acid House is not acclaimed nearly enough. I highly recommended to anyone who's willing to vitiate there brain, for two hours. I hoe all will love it as much as myself, though that's unlikely

Funny, but only the third story is good.

A weak adaptation of Welsh's short stories. A few interesting parts, but you're better off reading the book or seeing Trainspotting.