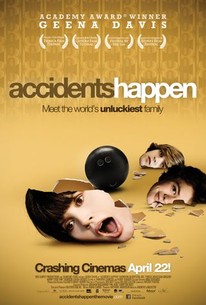 A dysfunctional New England family relies on the son prone to witnessing horrible accidents to get them though the hard times in this wry period comedy drama set in the 1980s. Billy Conway never set out to see the gruesome side of life, he just always happened to be around when it presented itself. One day, a terrible accident befalls the Conways, leaving one child dead and another severely brain-damaged. In the aftermath, Billy's dad leaves home. Caught between his troubled brother and his embittered mother, young Billy begins to stray from his good-son roots by hanging out with the neighborhood troublemaker. Who would have suspected that Billy's bad behavior could be the key to helping his family move on from the past and start life anew? ~ Jason Buchanan, Rovi

Morgan Griffin
as Katrina
View All

This take-no-prisoners family flick is not your average suburban trip.

Accidents Happen quite easily commits the menu of sins that have long dogged Australian films: bad direction, unfocused story, thin characterisation, emotional incoherence and almost no idea what type of film it is supposed to be.

Accidents Happen is a credit to the Australian film industry...

Star power helps Happen immensely, giving this dreary, confused picture a lift when it needs it the most. Too bad Davis couldn't fill all the roles. The film could've benefited with a little more of her personality.

What emotional life there is in this set up - and with so much is going on, there isn't much - is crushed by dreadful narration.

The main appeal of this modest and rambling slice of life is writer Brian Carbeeâ(TM)s delicious dialogue, which provides Davis with a string of amusing and acidic verbal put-downs.

It's left to Davis to rise above the limitations of the material, and she does so valiantly, but the scenes lack the wallop of the intended emotional payoff.

I think this is an extraordinary film, it's like no other I can think of in this country's history.

It's cloaked in dark humour, but has a profoundly moving core, and while grief is one of its themes, it's not remotely depressing. It's cathartic. It aims at the sorts of emotions that many of us have carefully kept buried, only to release them.

It is so good to finally see Geena Davis back on the big screen! Davis has always been one of my favorite actresses, showing a quick wit and a calm demeanor that has led to some tremendous films. In the new direct-to-video dramedy, Accidents Happen, she proves that she may have been on vacation for a while, but she hasn't lost a thing. In this film, Davis plays the mother of sixteen year old Billy Conway, (Harrison Gilbertson), who always seems to be in the wrong place at the wrong time. The film starts with a childhood accident that destroys his family and really defines just who Billy is. After a chilling, but hilarious opening, the film jumps to a sixteen year old Billy and what's left of his family. His mother is crazy, his brother's a drunk, and his father just isn't around anymore, so it's up to Billy to deal with the trials and tribulations of a boy who is growing into a man. Davis is listed as the star and she has some amazingly funny lines, but the story is really centered around newcomer Harrison Gilbertson, who gives one the best performances by a teen actor that I've seen all year. Gilbertson very clearly shows us how Billy is seeming unaffected by what happens to him, he's strong, and seemingly ready to deal with anything, but on the inside, Billy is much different than he appears. The character was a deep one with many levels and Gilbertson takes us through them all with ease. I loved this film, because while it's dark and depressing at times, they also joke about these things that you're not supposed to joke about. Just when things seemingly become to much, that humor creeps back in and makes you love how wickedly fun this film is. If you want to see something different, that will have you going back and fourth between laughter and tears, then this is the film for you. I went into this film expecting nothing, just looking forward to seeing Geena Davis again and what I got instead was one of the best movies I've seen all year.

Darkly moving, and very entertaining. I wasn't sure what to expect based on the synopsis, trusting that Geena Davis would deliver. She did, and did it well. Dysfunctional family. Dysfunctional neighbors. A very clever script, and strong acting. Very, very pleasantly surprised in how well done this little film was. Kudos!

Accidents Happen???? More like shit happens!! I do not know how this movie went under my radar. Life is full of accidents and this family and neighbors cope inspired me. I felt there are GREAT performances from Harrison Gilbertson and Geena Davis. A very touching, sad story of how a family's life is change starting with an accident! Highly recommend!!

Cast: Geena Davis, Harrison Gilbertson, Harry Cook, Joel Tobeck, Sebastian Gregory, Erik Thomson, Morgan Griffin, Rebecca Massey, Sarah Woods Director: Andrew Lancaster Summary: When 15-year-old Billy (Harrison Gilbertson) is involved in an accident, he becomes comically unhinged, and soon his family -- including an emotionally detached father (Joel Tobeck), a resentful mother (Geena Davis) and an aloof brother (Harry Cook) -- is launched into a downward spiral of dysfunction. As the one truly grounded member of the troubled Conway family, Billy has to pull everyone together in Andrew Lancaster's bittersweet drama. My Thoughts: "I am a sucker for movies about 'Dysfunctional families' (probably because I come from one). So that and it starring Geena Davis is how this film caught my interest. The movie is pretty heavy in the sense of everything this family is dealing with. The humor is dark in this film. Most of it coming from Geena Davis's character Gloria. I think that's how she deals with what state the accident has left not only her, but her children in. This film was carried out mostly by the younger actors. Geena Davis is front and center as well, but it is Harrison Gilbertson who carries most of the film. All of the acting is good in this, but Geena Davis of course steals every scene she is in. I also have to mention Harry Cook. He gave a great performance from start to finish. His character really brings you to tears. Grief is the vocal point in this film with every character you come in contact with. Gives you a slice of how everyone is dealing with it differently. I thought it gave an honest look at grief and the different ways people handle it. Although it is full of off-handed comments, I still found it (in the end) sincere. The finale of this film is emotionally heavy. It definitely brought me to tears. Just a great film with some great acting by Davis and the younger actors. I definitely recommend it."