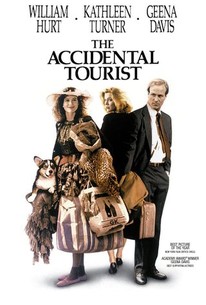 Critics Consensus: Generous with its characters' foibles and virtues, The Accidental Tourist is a thoughtful drama vested with insight into the complications of relationships.

Critic Consensus: Generous with its characters' foibles and virtues, The Accidental Tourist is a thoughtful drama vested with insight into the complications of relationships.

Director Lawrence Kasdan and Frank Galati adapted their screenplay for The Accidental Tourist from Anne Tyler's novel. William Hurt plays Macon Leary, a well-known "travel advisor" headquartered in Baltimore. The tragic death of Leary's son causes him to withdraw from the world, which in turn prompts his wife (Kathleen Turner) to walk out on him. Recuperating from a broken leg, Leary moves in with his sister (Amy Wright) and brothers (Ed Begley Jr., David Ogden Stiers)-staid middle-aged intellectuals all. Discipline problems with his dead son's dog lead Leary to hire flaky professional dogwalker/trainer Muriel Pritchett (Geena Davis, who won an Oscar for her performance). The only non-uptight person within shouting distance, Muriel begins to melt Leary's self-protective shell. Once his wife realizes that she has some competition, she makes moves to get him back. But he has by now become accustomed to Muriel's unfettered lifestyle. ~ Hal Erickson, Rovi

News & Interviews for The Accidental Tourist

View All The Accidental Tourist News

Critic Reviews for The Accidental Tourist

I've never seen a movie so sad in which there was so much genuine laughter.

As a comedy, Accidental Tourist is smart, witty and sophisticated.

It has that slow rhythm, but without calm, very much to the taste of its director. [Full Review in Spanish]

The strength of the film is that of the novel: an intoxicating brew of irresistable characters.

The film tries so hard to be funny, but ends up feeling like a rejected Woody ALlen script idea.

A mature, well-made film for teens and adults.

Kasdan's film lacks the spirit of Tyler's novel; he seems to be the wrong director to translate the author's affectionate and humorous treatment of the characters. Fortunately, Geena Davis as the eccentric dog-walker elevates the otherwise morose mood.

A genuinely beautiful and human story out of the Hollywood mills. Subtly amazing work from all concerned.

This is a warm movie told in the temperature of almost-recognizable life; it's a believable love story, joked up a bit but not too much.

Beautifully-acted comedy-drama that doesn't overdose on its quirks.

Hurt and Davis at their peaks in a touching, well-crafted drama

Audience Reviews for The Accidental Tourist

William Hurt sure made some really great movies back in the 80s and 90s. I cant say that I have watched anything lately that he has starred in. This movie was very good. I had a hard time getting past Geena Davis and her horrible 80s fashion, but I guess that I cant blame the movie itself...just the era. This movie had a very nice ending, which is always a plus for me.

The Accidental Tourist starring Geena Davis, William Hurt and Kathleen Turner is a very good film based on the best selling novel. William Hurt and Kathleen Turner play a couple who's child passes away which places a lot of strain on the marriage. The couple divorces and in comes an off the wall lady into his ife (Geena Davis). She re introduces a new passon in his life...Geena Davis won the Oscar for the Best Supporting Actress and rightfully so.

The thing I really love about Kasdan's scripts is that he tells us what happened without TELLING us what happened. A little slow past the first half but still neatly wrapped with great underscored humor. I love Welsh Corgis!