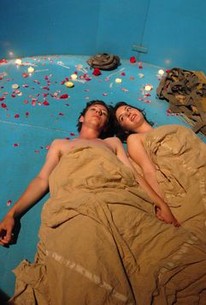 As the date on which Aya's grandmother predicted that the pretty young girl and her childhood sweetheart would consummate their relationship draws near, the frustrated couple finds their perfect moment threatened by a battle of the sexes that sweeps through their once-thriving village. There was a time when the village of Absurdian was considered a paradise, yet lately it looks like a dried-up wasteland due to a troubling shortage of water. Years ago, Aya's grandmother foresaw a night when the stars would align in the sky, and two young lovers would come together in a cosmic embrace. Now that night is drawing near, though the women in Absurdian have grown frustrated with the men of the village. Though young inventor Temelko believes he may have come up with a creative solution to the remote hamlet's water woes, his apathetic elders respond to the proposal with ridicule and disdain. As the women of Absurdian take a pledge of abstinence in response to male inaction, young lovers Temelko and Aya begin to question whether the encounter they have spent their young lives anticipating will ultimately be foiled by events beyond their control.

Otto Kuhnle
as The Barber

Hendrik Arnst
as The Landlord

Olga Nefjodova
as The Landlord's Wife

Adalet Zyadhanov
as The Policeman

Michaela Bandi
as The Baker's Wife

Blagoja Spirkovski-Dzumerko
as The Cobbler

Dace Bonate
as The Cobbler's Wife

Elhan Guliyev
as The Bus Driver

Absurdistan has more than a little bit of magic at its heart; it's a tale of love and perseverance, gently winking at its happy viewers.

Writer-director Veit Helmer creates a wildly imaginative world worthy of Gabriel Garca Mrquez at his most playful, drenching it in vivid color and a Slavic sense of bleak humor.

Despite its comedic limitations, this film is up to more than its American adolescent counterparts.

Makes for a lovely hour and a half of old-fashioned storytelling.

Has a folkloric charm buoyed by consistent comic inventiveness.

Once you've seen 20 minutes of this film, you can pretty much predict where it's going to go and how it's going to get there. There's little doubt, however, that you'll chuckle heartily along the way.

The trip to Absurdistan is worth taking, detours and all.

A simplistic, straightforward tale that's beautifully staged with the same wave of the magical-realism wand that powers Jeunet & Caro's Delicatessen.

A funny and bawdy fable that playfully deals with community, a battle between the sexes, the preciousness of water, and the joy of young love.

A lighthearted charmer, one of the most spirited and enjoyable comedies to hit ... theaters so far this year.

The film isn't much more than light slapstick bookended by a sweet if lust-driven romance.

This movie is really fun despite having little to no dialogue between the characters. There's voice overs for the main two characters that ties everything together but everything else are visual gags and creative use of slapstick. I would definitely recommend this movie, it's fun and charming.

A young couple's about-to-be-consummated love is threatened when the women of their village organize a sex strike against the lazy townsmen who will not fix the pipe that brings water to the hamlet. Set in an exotic, timeless locale and so spare with it's dialogue that it's almost like a silent movie; it's a lusty romantic comedy that manages to feel completely original without sacrificing the romance and sentimentality fans of the genre expect.

A delightful absurdist fantasy of a young couple and their desire to come together while the stars auger well for their relationship. Somewhat of a Russian folk tale of how the women force the men of their village to repair the village water supply. Do not look for logic here. It is sorely lacking. But there is a bit of fun and the young woman, Aya (Kristyna Malerova) is an especially nice bit of eye candy. The landscape is stark and harsh, and the villagers barely eke out a living in a place that is left unclaimed by any country. Yet even here, passions can get inflamed and young love flourishes. Three stars and worth the view, if only for an introduction to another culture.