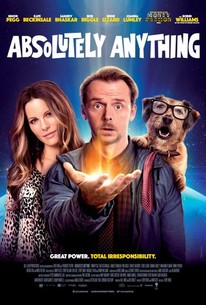 Critics Consensus: Given the impressive array of talent involved in Absolutely Anything -- and the near-total lack of laughs it provokes -- this Monty Python reunion can only be regarded as a disappointment.

Critics Consensus: Given the impressive array of talent involved in Absolutely Anything -- and the near-total lack of laughs it provokes -- this Monty Python reunion can only be regarded as a disappointment.

Critic Consensus: Given the impressive array of talent involved in Absolutely Anything -- and the near-total lack of laughs it provokes -- this Monty Python reunion can only be regarded as a disappointment.

Monty Python alumni John Cleese, Terry Jones, Michael Palin, Terry Gilliam, and Eric Idle reunite for this sci-fi comedy directed and co-written by Jones (along with Gavin Scott), and centering on the story of a group of mischievous extraterrestrials (voiced by the Python crew) who grant embittered schoolteacher Neil Clarke (Simon Pegg) extraordinary powers in order to see how he will use them. Subsequently seeking the wisdom of his loyal canine companion Dennis (voice of Robin Williams) in order to use his powers wisely, Clarke is ultimately forced to choose between the girl of his dreams (Kate Beckinsale), or the four-legged friend who has never left his side. ~ Jason Buchanan, Rovi

Eddie Izzard
as The Headmaster

Robin Williams
as Dennis the Dog

Joanna Lumley
as Fenella
View All

News & Interviews for Absolutely Anything

King Arthur: Legend of the Sword Is a Medieval Mess

View All Absolutely Anything News

Critic Reviews for Absolutely Anything

Absolutely Anything is a good idea but is executed poorly, with a lame take-home message about great power demanding great responsibility.

The redeeming factor is the sheer, unabashed silliness.

It's often been said that Simon Pegg would agree to star in absolutely anything: now at least it's official.

Certainly one of the worst movies yet made.

The second word of the title should be "appalling".

Eric Idle always tells us to look on the bright side, but it's hard to see a bright side to this depressingly unfunny movie. See absolutely anything else.

Jones's cult status ensures a decent cast but the execution is messy, short of laughs and tiresome.

[Simon] Pegg's goofy charm is on overdrive, elevating this silly comedy where the best scenes are between Neil and his talking dog Dennis (voiced by the late Robin Williams).

This 2015 film badly misses the mark.

The result is a loosely knitted together series of vignettes, some of which raise titters, but the majority of which elicit groans.

Audience Reviews for Absolutely Anything

A better cast, worst scripted Bruce Almighty. The execution is severely lacking, and as much as I adore seeing Simon Pegg and Kate Beckinsale ham up the screen, it seems obvious how much better this could (and should) have gone. What we are left with in Absolutely Anything is a movie that was engaging, yet glaringly bad, the sort of thing I didn't hate watching, but will never watch again.

A waste of plot briefly saved by a few laughs!

Bruce Almighty gets a British redo. So that's what it's like when a property gets a foreign treatment. Now we can understand what the Brits complain about when we "borrow" their stuff. Many good talents absolutely thrown to waste. Eh. And I'm not mentioning at all that Monty Python is involved in this, dragging that hallowed name through the gutter of who really gives a duck.