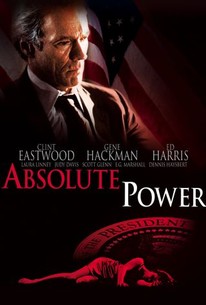 In this thriller, an aging cat burglar becomes a crusader embroiled in a deadly cat-and-mouse game involving murder and a government cover-up. Adapted by distinguished scenarist William Goldman from a novel by David Baldacci and featuring a powerful all-star cast, the story works at different levels, not only as a straight-forward thriller but also as an insightful look at the love between the old thief and his estranged daughter, a highly successful prosecuting attorney. The trouble begins when ex-con Luther Whitney (Clint Eastwood, who also directed) decides to pull off one last heist before retiring. Just as he finishes looting the vault of a well-fortified mansion, a drunken couple enters the adjoining bedroom apparently eager to start making love. But something goes awry and a violent tussle ensues that abruptly ends when gun-wielding men bust in and shoot down the woman. During the ensuing chaos, Luther slips out. Only later does the audience learn that the would-be lovers were U.S.-President Alan Richmond (Gene Hackman) and Christy Sullivan (Melora Hardin), the young wife of the President's biggest supporter Walter Sullivan (E.G. Marshall). As the investigation and cover-up begins, Luther, who has already been contacted by hard-boiled and suspicious detective Seth Frank (Ed Harris) begins to fear that he will be blamed for the killing and prepares to leave the country. He tries to see his daughter Kate (Laura Linney) to make peace with her for having been absent in prison during most of her life, but she rejects him. Luther goes to the airport, but just before he flies, he sees a press conference in which President Richmond, without so much as a twitch, goes on a tirade concerning his stand against violence. Something inside him snaps and he abruptly decides to stay and fight for justice. ~ Sandra Brennan, Rovi

Robert Harvey
as Cop
View All

Eastwood the director sets a pace so poky that grannies with walkers seem fleet in comparison. Of course, this makes the many plot holes and implausibilities all the more evident...

Absolute Power is... fresh out of the clichés that reduce most thrillers to formula.

Clint Eastwood as producer-director-star strikes out in a rather slack thriller that oddly recalls a couple of Hitchcock's lesser movies, To Catch a Thief and Topaz.

"Absolute Power" is not a "must-see." But if you're looking for a well-made, grown-up movie, it's worth your time and money.

"Absolute Power" wanders. Yet, the movie is worth seeing simply because of Eastwood's presence, his (and Green's) camera, his excellent cast.

Eastwood is at his effortless, slyboots best: he deftly cranks up the suspense at the beginning, but by the end he's cruising along so briskly that he can afford to throw away the climactic, violent scenes other directors would belabor.

Credibility is the main casualty of the piece, but William Goldman's taut script is well realised by thoughtful direction and the high-calibre cast.

"Absolute Power" is appealingly untrendy: no car chases, no explosions, no nubile strippers. There isn't even a single character in the movie under 30.

Absolute Power is one of those evil-in-high-places thrillers that hums along nicely while the crimes are being committed, and sputters while they're being solved.

It's more effective than expected - aside from the scenes of excessive sex and violence, that is - mainly because Eastwood gives one of the most deeply felt performances of his career.

It's let down by a wildly implausible script... but it's still enjoyable, and the sleaze theme is nothing if not timely.

A taunt, riveting and first-rate thriller with a twist. A compelling, well-character drawn and masterfully crafted crafted thriller from Director, Clint Eastwood. Eastwood is brilliant, he gives a great and gritty performance. Laura Linney is excellent. Ed Harris is terrific. It`s a utterly exciting and pulse-pounding thrill-ride. A fantastic movie. It delivers top-notch acting, tightly-paced plot and outstanding craftsmanship. Thrillers don`t get anymore exciting or smart than this one.

Okay movie. Didn't really stay focused....so how good could it have been? Typical 90's movie.

This is a really fun mystery thriller. If you love Clint Eastwood and the genre, it's practically a shoe in. I really liked the idea of knowing the answers, but not knowing why they were relevant until the story unfolded. Clint Eastwood as a jewel thief is a really interesting thought. Usually he's on the other side of the law, but it turns out he can play both sides with complete ease. It's also bizarre when Gene Hackman plays evil characters because he does it so well.

CLINT EASTWOOD. I dont need to review on this Movie. OUTSTANDING.