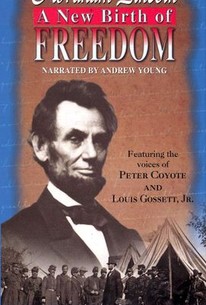 The 16th president of the United States comes fully to life in the one-hour special Abraham Lincoln: A New Birth of Freedom. This PBS program explores the history of the gentle leader from birth to presidency. Lincoln was unlike any other world leader because of his sense of humanity and justice. Raised in the wilds of Kentucky, the tall gangly pioneer educated himself, eventually earning a law degree. His devotion to freedom was played out during his unique reign in the White House. By far, Lincoln's greatest challenge was navigating the Civil War and its aftereffects. Dedicated to the abolishment of slavery, Lincoln fought hard to maintain that ideal while holding the Union together. All the while, he had to fight the possibility of a British invasion. This in-depth documentary features the voices of Andrew Young, Peter Coyote, and Louis Gossett Jr. It offers a rare glimpse into the motivations of one of America's greatest heroes.

Critic Reviews for Abraham Lincoln: A New Birth of Freedom

There are no critic reviews yet for Abraham Lincoln: A New Birth of Freedom. Keep checking Rotten Tomatoes for updates!

There are no featured reviews for Abraham Lincoln: A New Birth of Freedom at this time.