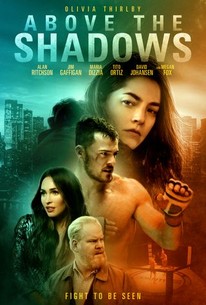 Above the Shadows Videos

Above the Shadows Photos

A supernatural tale follows a young woman (Olivia Thirlby) who has faded from the world to the point of becoming invisible. After more than a decade existing in the shadows, Holly meets the one man who can see her, Shayne Blackwell (Alan Ritchson), a disgraced MMA fighter. Holly discovers that it was one of her tabloid photographs that caused his downfall, and that she must restore him to his former glory if she wants to regain a foothold in the world around her. With Shayne, Holly awakens to love but also to the possibility that she may remain invisible forever.

Critic Reviews for Above the Shadows

The savvy smarts within don't quite sustain the running time and, much like its protagonist, the film becomes transparent in its motives and sentimentality.

Thirlby gives a good performance as someone who finds it easier to remain a non-person than to make any effort to fix her life. But the more Holly comes into view, the blander her character becomes.

Sadly, the answers that emerge from this crisis fail to give any satisfying literal explanation to the film's central metaphor - and the metaphor itself seems misplaced.

Above the Shadows is an interesting journey that is well worth taking.

You just have to go with it, but Above the Shadows will reward you for that journey.

There are plenty of contrivances and an ending that is a bit of a head-scratcher but Myers manages the rare feat of examining profound grief and monumental loss in novel, touching way.

There are no featured reviews for Above the Shadows at this time.

Above the Shadows Quotes