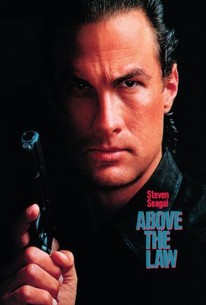 Above the Law Photos

Directed by future Fugitive helmsman Andrew Davis, Above the Law is one of a handful of Steven Seagal films with an appeal extending beyond Seagal's hardcore fans. Making his feature film debut, the star plays a Vietnam vet-turned-Chicago cop (what a parlay!) who uncovers an insidious conspiracy when he plans a major drug bust. The FBI tells him to forget the bust-on direct orders from the CIA. The plot is essentially an excuse for Seagal to smash heads and kick butt at the slightest provocation; still, it is not so much the violence content as the film's depiction of drug users that earned Above the Law an R rating. All this, and Pam Grier and Sharon Stone too!

Rom Milanovich
as Man in Bar

Mario Nieves
as Man with Gun

Michael Rooker
as Man in Bar

Dan Janecek
as Man in Bar

Tom Milanovich
as Man in Bar

Gene Hartline
as Man in Bar

Critic Reviews for Above the Law

Woefully short on originality, intelligibility and anything resembling taste.

It contains 50 percent more plot than it needs, but that allows it room to grow in areas not ordinarily covered in action thrillers.

Above the Law has enough off-beat updates on the cops-and-robbers theme to at least make the film visually interesting most of the time.

...the overstuffed narrative contributes heavily to the movie's eventual downfall...

A jejune actioner that has pretensions of making a political statement about such things as drugs, smuggling and illegals.

...old-fashioned, nonstop violence from beginning to end, with subtlety out the window.

An artifact from way back when Steven Seagal was novel and therefore sort of cool.

above-average, and much better than Seagal's later efforts

It might be arguable whether it is the best Seagal film or not, but Nico still has all important Seagal trademarks.

Audience Reviews for Above the Law

sets the stage for what every other seagal film would be for me - entertaining and fun to watch, a guilty pleasure, although the same as every other film he has ever made in most regards. overall, i love this movie.

After watching it again, I realised that there was more to this film than a typical Seagal flick. For starters, its his first major hit and it also set the standard for the 90's cop thriller drama. Dont expect this to be an action movie, its a cold hard thriller with Seagal for the first time showing his red hot temper and devestating his opponents as he battles a shadowy CIA group dealing drugs and weapons from South America and into the US. Framed, harrassed and finally marked for assassination, Seagal plays Nico, a diamond hard cop and special ops veteran who crosses the path of his old enemies from Vietnam and the black group who believe themselves to be untouchable. With a good cast and helmed by Andrew Davis (Under Seige and The Fugitive) it is a plot worth thinking about as you dont know how the pieces fit together until the latter part of the movie, so its not a typical dmub story, its got meaning and a moral, which is expressed through Seagal's script and narrative. Very modern and slicker than your average movie, this one is worth watching, dont dismiss it as a cheap Seagal flick, its probably one of his best.

Seagal's first starring role with a very impressive cast led by Blaxploitation-veteran Pam Grier as his long-suffering partner, Sharon Stone as his wife and Rat Pack hangaround Henry de Silva as the bad guy. A good movie and a sign of things to come for Aikido-legend Seagal - at least until he did Under Seige 2.

This debut action film of karate expert Steven Seagel is fantastic and bloody tough in the cop thriller. Director Andrew Davis gives the movie style, pace, and gets the best acting out of Seagal yet.

Above the Law Quotes