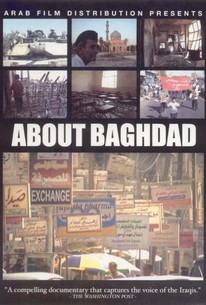 Sinan Antoon is a journalist, novelist, and poet who left his native Iraq to escape the unstable and repressive political environment. In the summer of 2003, though, Antoon returned to the city of Baghdad with a camera crew in tow, and as he wandered the once-mighty city, which had been pockmarked by political conflict and war, he interviewed as many people as he could, ranging from politicians and intellectuals to shopkeepers, cab drivers, and American soldiers. The result, About Baghdad, offers a wide variety of perspectives on the city and how years of conflict in a number of forms have changed Baghdad and its people. The film also offers a sampling of Antoon's writings about Iraq, as well as showcasing the works of other Iraqi artists.

Critic Reviews for About Baghdad

This collectively made video documentary is by far the most comprehensive account I've seen of how Iraqis view the U.S. war and occupation.

Audience Reviews for About Baghdad

There are no featured audience reviews yet. Click the link below to see what others say about About Baghdad!