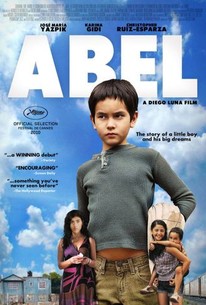 Actor Diego Luna stepped behind the camera to direct this warm drama about a young boy whose emotional problems take him in an unexpected direction. Abel is an unstable child whose issues have only gotten worse since his father walked out on the family. No one in the household is sure what to do for Abel or how they should behave around him, and a stay in a mental hospital does little to ground him. However, one day Abel wakes up and decides that he's the man of the house, and begins acting like his absent father rather than the youngest child. To the surprise of everyone, adult responsibilities agree with Abel, and the family seems significantly happier with his new personality. But this proves to be short-lived when Abel's real dad unexpectedly returns, and the two vie for the status of head of the household. Abel received its world premiere at the 2010 Sundance Film Festival. ~ Mark Deming, Rovi

After its edgy, deliberately puzzling first hour, it starts to run out of steam, but at 85 minutes it doesn't overstay its welcome.

It's an intriguing film...

Abel may mark the beginning of a major new Latin American voice.

A comedy that is creepy and amusing in just the right measures.

Abel works best as a situational comedy... There is also a serious message about parental abandonment and the treatment of children by society that doesn't always hit home.

Diego Luna's promising debut as a director is a slight and charming tale of a troubled young boy's retreat into fantasy.

Enjoyable, off-beat drama that's both darkly funny and emotionally engaging, thanks to assured direction from Diego Luna and a terrific central performance from young Christopher Ruiz-Esparza.

A slow-burning but satisfying comedy that goes for gentle humour rather than belly laughs.

Mexican cinema adds another gem to its treasure chest.

Engaging and involving, and so bizarre that it's impossible to predict where the story's going

Rich Cline
Shadows on the Wall
View All Critic Reviews (15)

The drama lies in everyday situations for adults, but dangerous ones for children. The comedy presents itself in the hilarity of kids acting as grownups. John Malkovich-produced Mexican dramedy is sort of reminiscent of 'Lars and the Real Girl' in the way those who surround a character with severe mental issues act and react. Strong performances from first-time actor Christopher Ruiz-Esparza, Karina Gidi and Diego Luna's friend and frequent collaborator, 'Chema' Yázpik. Unfortunately, in the end, the film doesn't wrap up neatly, it just finishes.