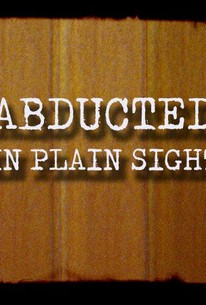 On October 17, 1974, 12 year old Jan Broberg was kidnapped by her next-door neighbor and parents' best friend. Abducted In Plain Sight is a feature length documentary about the stranger-than-fiction, true story of the Brobergs; an Idaho family who fell under the spell of a sociopathic neighbor with designs on their twelve-year-old daughter. The film tells the story of one family's struggle with desire, deceit, faith and forgiveness. The Brobergs' troubling admissions reveal epic failures and untold personal dramas that point to the biggest tragedy of all -- that these crimes could have been prevented.

It unpacks too many bizarre events in a short time frame to allow for much additional analysis. And the Broberg family, confessional to a fault, are primed more for honesty than for self-inspection.

[T]he pacing and cheap aesthetics marginalize the most crucial beats into a collage of blink-and-you-miss-it minutiae, essentially minimizing a pedophile's evil in the process.

... it's a decently made one and it has a good way of telling its story. It has an important message in that it wants to help prevent other families from going through this.

The fact that all five of the Brobergs are emotionally healthy enough recount the details of this unthinkable period is a blessing.

A complete and informative movie regarding a bizarre case of obsession and mischief. It's scary to admit this actually happened. [Full review in Spanish].

I have not been glued to a screen like this in years.

A troubling but important story for people to hear...one of the craziest documentaries I've ever seen, albeit not the best produced. The reenactments were incredibly unsettling and confusing.

Borgman handles these confessions responsibly. A lot of painful truth -- about the escalating nature of sin, for example -- comes from watching Bob and Mary Ann Broberg crumple into tears as they recount their guilt.

Like all these shows, it was surrounded by hype and snakily promised to be higher quality than the stuff you find on the Crime Channel.

The subject matter is not for everyone, but it is a documentary one should not miss. [Full Review in Spanish]

There are no featured audience reviews yet. Click the link below to see what others say about Abducted in Plain Sight!