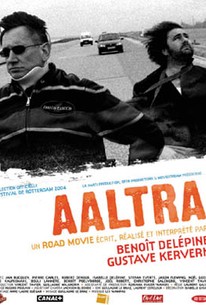 Two irascible farmers find their bitter rivalry taking on epic tones in this pitch black comedy starring, written, and directed by Benoît Delépine and Gustave Kervern. They may spend their days toiling the land, but these two tillers of the soil are far from humble. When their ongoing feud escalates into all out war and both men wind up paralyzed by a tractor, they soon opt to focus their rage not on each other, but on the manufacturer of the machine. Now, as the former enemies make their way to Helsinki in order to exact their revenge, the stage is set for a hilarious confrontation. ~ Jason Buchanan, Rovi

I saw this alleged crowd-pleaser around the time it came out and can barely remember it now.

For the bumpy ride that Aaltra offers, there are simply no seatbelts to fasten... Uproariously funny from beginning to end.

Brilliant comedy of the absurd. So expressive, that I do not think the words were really necessary.