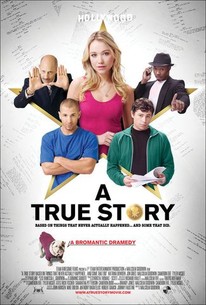 The film concerns Mike and Matt (Fife and McGee), two broke writing partners and best friends, waiting for their big break. When Mike's ex-girlfriend Deanna (Bowden) comes back into his life, Matt will do anything to save his only friend from another broken heart. A TRUE STORY is a film within a film...within a film, as we see the less glamorous side of Hollywood. The story is not, however, inclusive to the LA scene. It's a story about resisting temptation, maintaining integrity, and keeping track of what's really important in life: the people that really love you and would do anything for you, however imperfect they might be. (c) Freestyle

Critic Reviews for A True Story

There are no critic reviews yet for A True Story. Keep checking Rotten Tomatoes for updates!

There are no featured reviews for A True Story at this time.