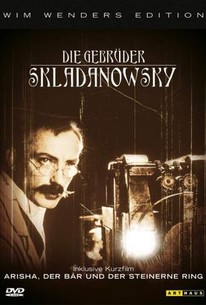 This highly idiosyncratic film, seen mostly at film festivals, is intended to be shown in segments broken up by musical interludes. It is a centennial tribute and depiction of the efforts of the brothers Skladanowsky to create and show the first motion pictures, hence, much of it was filmed using antique silent-film gear. This odd feature film by director Wim Wenders and his Munich film school class began as a class assignment. The Skladanowsky brothers gave "magic lantern" shows in Berlin for years before taking up the challenge of developing moving pictures. Their amateur efforts resulted in their development of a projector called the "Bioskop," (Bioscope), and their first commercial showing of a moving picture in Berlin in 1895 predates the Lumiere brothers' commercial showing in Paris by several weeks. The Lumiere brothers developed yet another type of film projector. Together with Edison and the Lumiere brothers, the Skladanowsky brothers deserve credit for the development of motion pictures. In this film tribute, large sections are done in the style of later silent features. In other portions of the film, Lucy Hurtgen-Skladanowsky (the very aged surviving daughter of one of the two brothers) vividly recounts her memories of the hectic activities surrounding the Bioskop premiere.

Critic Reviews for A Trick of Light (Gebrüder Skladanowsky, Die)

An ode to cinema's birth that aims to both set the historical record straight and pay loving tribute to the magical medium itself.

There are no featured reviews for A Trick of Light (Gebrüder Skladanowsky, Die) at this time.