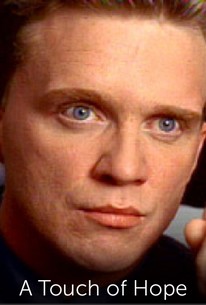 A Touch of Hope Photos

This made-for-TV feature is based on the true story of Dean Kraft, who worked within the traditional medical community as a hands-on healer. Discovering his unique gift at an early age, Kraft (played as an adult by Anthony Michael Hall) is reluctant to utilize his healing talents, agreeing to do so only under emergency conditions. Even when he comes to terms with his abilities, Kraft must face the often hostile skepticism of "mainstream" doctors and caregivers. The story reaches a melodramatic apex when Kraft attempts to bring a doubting doctor's daughter out of a coma. Scott Davis Jones' teleplay is careful to neither fully confirm nor flatly deny Kraft's healing prowess, permitting viewers to draw their own conclusions. A Touch of Hope made its NBC network debut on October 10, 1999.

Critic Reviews for A Touch of Hope

There are no critic reviews yet for A Touch of Hope. Keep checking Rotten Tomatoes for updates!

There are no featured reviews for A Touch of Hope at this time.

A Touch of Hope Quotes