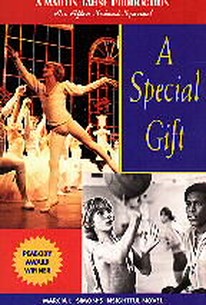 The central character in this ABC Afterschool Special is 14-year-old farm boy Peter Harris (Stephen Austin). To his friends and family, Peter is a hero because of his skill as a basketball player. But Peter would rather give up athletics to become a ballet dancer, an ambition that his hypersensitive father disapproves of and tries to conceal from the rest of the world. When the truth is revealed, will Peter be labeled as a "sissy" -- or will he earn respect and support for following his own dream rather than someone else's? Based on a novel by Marcia L. Simon, A Special Gift was the winner of a 1980 Peabody Award.

Critic Reviews for A Special Gift

There are no critic reviews yet for A Special Gift. Keep checking Rotten Tomatoes for updates!

There are no featured reviews for A Special Gift at this time.