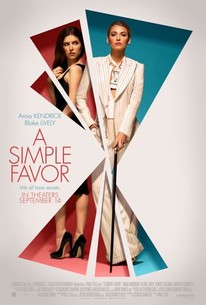 A SIMPLE FAVOR, a stylish post-modern film noir directed by Paul Feig, centers around Stephanie (Anna Kendrick), a mommy blogger who seeks to uncover the truth behind her best friend Emily's (Blake Lively) sudden disappearance from their small town. Stephanie is joined by Emily's husband Sean (Henry Golding) in this thriller filled with twists and betrayals, secrets and revelations, love and loyalty, murder and revenge.

News & Interviews for A Simple Favor

10 Breakout Stars of 2018
The Predator Is a Disappointment

View All A Simple Favor News

Critic Reviews for A Simple Favor

It seeks only to entertain, and in its haphazard way it does.

A deeply confused movie that feels like a mash-up of Mean Girls and an episode of Law and Order.

This half-baked missing persons thriller...gamely attempts to reinvent the careers of its two stars and its director, but isn't nearly dark, nasty or tough enough.

Kendrick and Lively have never been funnier, snapping one-liners at each other like elastic bands; the script is hyper-alert to the undercurrent of competitiveness between stay-at-home and working mums.

With its saucy French pop music and pastel Saul Bass-inspired credits, this film is so hungry to seem like a classic thriller that you come away charmed by its pure-hearted ambition.

Its clash in storytelling styles is bracing and original.

Blake Lively dominates the screen with a ridiculously sexy star turn that forces her into some outrageous outfits. She delivers a precise comic performance.

[I]t's a bauble of a film, just dark enough to be edgy, just frivolous enough to be weightless. But at least [Paul Feig's] got that marvelous performance from [Blake] Lively anchoring it all.

There is smart writing, editing and enough humor in this slick production to keep you interested and off base.

Even as the plot becomes convoluted-sometimes to excess-it's still the kind of consciously ridiculous suburban satire that is going to please any audience it plays to. A Simple Favor is a mess in the best way possible.

It is a very enjoyable and sophisticated thriller that relies very well on the chemistry between its two protagonists. [Full Review in Spanish]

Audience Reviews for A Simple Favor

Anna Kendrick and Blake Lively star in the odd dark comedy(?) A Simple Favor. When her best friend goes missing Stephanie uses her cooking video blog to launch her own investigation (with the help of her followers) and soon learns that her friend wasn't who she thought she was and that she faked her own death. Both Kendrick and Lively give strong performance (especially Lively) and have great chemistry together. The script is kind of weak and takes a while to get to the plot, but once the murder mystery kicks in the film starts picking up momentum and doesn't let up. And it's a good mystery, fully of suspense and intrigue. Plus there's some quirky black humor that's rather amusing. It has a few rough spots, but overall A Simple Favor is an entertaining and fun crime thriller.

Entertaining. I did like the dark humor and Blake Lively was perfect as the disturbed Emily. The bit at the end was the step too far, though.

Paul Feig has shown us before what an enviable talent he has for blending different genres, but here he truly outdoes himself, making a clever, twisty and always gripping film that makes us hold our breath as it moves so effortlessly from dark comedy to crime noir to even horror.

I always enjoy films that surprise me. Since the beginning of the film industry, the awe and wonder of going to the movies has always been the joy of seeing the movie itself. Whether a mystery film gives you a great plot twist or a comedy makes you laugh harder than you have ever laughed before, getting more than what you expect is always a plus. A Simple Favor is one of the latest films to receive a book-to-film adaption, and while many of those movies are ripped apart by fans of the novels, I have always been someone who watches the movie for the movie, regardless if I have read the book or not. In this particular case, this entire premise was new to me upon viewing the first trailer, so I went into this film completely cold, which is why I think I enjoyed it so much. If you're a fan of mystery in any form of the word, then I believe you'll share in the experience of having a great time at the movies with this one. A Simple Favor follows Stephanie (Anna Kendrick) and Emily (Blake Lively) as their kids want to hang out with each other after school, which allows them to form a friendship of their very own. After Emily asks Stephanie to watch her son for a while, she completely vanishes, not answering phone calls, texts, emails, etc. Stephanie, along with Emily's husband, Sean (Henry Golding), do their very best to uncover the mystery of her absence, while possibly even forming a bond of their own. This film is filled with plot twists that I never saw coming and a conclusion that not only flips this genre on its head but also has a dark comedy element as well, which is probably due to the fact that Paul Feig was at the helm. Although not written by him, director Paul Feig has been known for his comedies in Bridesmaids, The Heat, and Spy, all of which I have thoroughly enjoyed. It was a surprise to see him tackling a dramatic mystery, but when you really sit back and experience this film for all that it is, it's quite comical under the surface. Aside from maybe Bridesmaids, this may actually be my favourite film of his. Written by Jessica Sharzer (Nerve, American Horror Story) and newcomer Darcey Bell, it was very clear that they were the ones who kept this film on track in terms of the dramatic tone and clever plot twists, but it's very apparent that Paul Feig had some fun with it when piecing it all together when filming began. This film is a true mix of both. Even though I'd almost say that I loved this movie, I do have to admit that I fear some audiences may be turned off by the comedic undertone. If you're not the type of viewer who can accept a comedic beat that immediately follows a tragic incident, then A Simple Favor may be a little too uneven for you. It worked for me, personally, but I can see where the criticism may come into play. To myself, this is a very well-written and well-directed film from beginning to end, with a lot of attention to detail. Overall, A Simple Favor kind of came out of nowhere for me. I wasn't aware this film was coming out and I'm glad it got a wide release for everyone to see. If you're looking for a film to surprise you, this may end up being one of your most memorable film experiences of 2018. While I can't see it receiving any big nominations, it deserves far more attention than what it's currently getting. Through all its plot twists and comedic elements, I found myself completely engaged with this story. A Simple Favor is a pleasant surprise of a movie that I highly recommend.