A Short History Of Decay2014 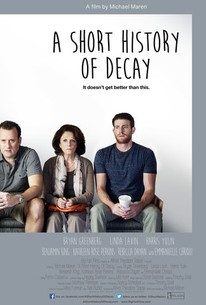 A Short History Of Decay Photos

When Nathan Fisher, a thirty-something Brooklyn writer with a stalled career, is dumped by his ambitious girlfriend, he doesn't know where to turn. Suddenly, he gets a call telling him his father has been hospitalized and races down to Florida to help. His short visit turns into an extended stay during which he discovers that his aging parents are in much better control of their lives than he is. He also meets a woman, the polar opposite of his ex, who may be exactly what he is looking for. Starring Bryan Greenberg, Linda Lavin, Harris Yulin, Kathleen Rose Perkinsm and Emmanuelle Chriqui. (C) Paladin

Nicholas Pryor
as The Man in White

Nick Flynn
as Himself

News & Interviews for A Short History Of Decay

View All A Short History Of Decay News

Critic Reviews for A Short History Of Decay

Although more than a little meandering and self-indulgent, the film is likeable nonetheless due to its incisive characterizations and canny capturing of true-life moments.

While these loose ends might sound like scrambled bits out of an Eric Rohmer film, Mr. Maren's movie rather finds its groove in its humble domestic detail.

Lavin is a treasure. But Erika is right - Nathan's neurotic self-indulgence strains our patience.

Not a lot happens, and yet, as in the best so-called "slice of life" stories, you feel one way of life ending and another struggling to be born. The little that happens is enough.

Maren's script isn't deep, but it's heartfelt without being sticky, suggesting that the best way to deal with aging parents is to savor every tender frustration while you can.

There is nothing to inherently dislike in A Short History of Decay, but neither is there anything to love.

Writer-director Michael Maren takes on a subject that is affecting baby-boomers all over the world...and he does so with a certain necessary seriousness and sensitivity. The problem here is that his film is neither very deep nor particularly moving.

[The] film desperately tries to mine sweetness from the banality of life's endgame, but the falseness of its bittersweet storytelling only accentuates the misery.

The film flourishes when it moves away from a coming-of-age story to a more family ensemble piece.

A satisfying little film that keeps surprising you with its ability to tell recognizable truths in an original and human way.

For the most part, A Short History of Decay triumphs over its pretensions.

Audience Reviews for A Short History Of Decay

There are no featured audience reviews yet. Click the link below to see what others say about A Short History Of Decay!

A Short History Of Decay Quotes