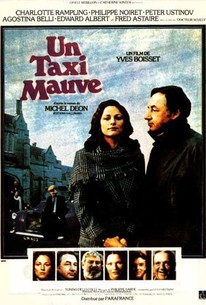 An ambitious musical adaptation of Michel Déon's best-selling novel, Un Taxi Mauve is set in Ireland during a time in which the nation announced it would no longer demand income taxes of artists, bringing a steady stream of creative bohemians to the Emerald Isle. Novelist Philippe (Philippe Noiret) is a French novelist recently relocated to Ireland, where makes friends with Jerry (Edward Albert), an American expatriate who left his home after the death of his girlfriend. Philippe and Jerry become chummy with Taubelman (Peter Ustinov), who is looking after Anne, a beautiful young woman who cannot speak. Jerry becomes infatuated with Anne, while Philippe tries to win the heart of Sharon (Charlotte Rampling), Jerry's sister. Fred Astaire also appears as Dr. Scully, an American physician who has come to Ireland to live out his final years. ~ Mark Deming, Rovi

Something of a mess, but an entertaining mess with a game cast having fun in their oddball roles.

There are no featured reviews for A Purple Taxi (Un taxi mauve) at this time.