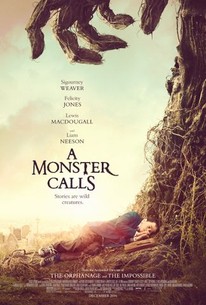 A visually spectacular drama from director J.A. Bayona ("The Impossible"). 12-year-old Conor (Lewis MacDougall), dealing with his mother's (Felicity Jones) illness, a less-than-sympathetic grandmother (Sigourney Weaver), and bullying classmates, finds a most unlikely ally when a Monster appears at his bedroom window. Ancient, wild, and relentless, the Monster guides Conor on a journey of courage, faith, and truth. Toby Kebbell plays Conor's father, and Liam Neeson stars in performance-capture and voiceover as the nocturnally visiting Monster of the title.

Liam Neeson
as The Monster

News & Interviews for A Monster Calls

Las Vegas Film Critics: Three Billboards Outside Ebbing, Missouri Takes 5 Awards
How Family-Friendly are Ghost in the Shell, The Zookeeper’s Wife, and The Boss Baby?
On DVD This Week: Fantastic Beasts and Where to Find Them, Silence, Planet Earth II, and More

View All A Monster Calls News

Critic Reviews for A Monster Calls

A Monster Calls is an adaptation of a children's book with a title that makes it sound like a horror movie. Neither of these things should obscure the fact that it's the most mature film of the year -- and one of the most moving.

The movie delivers its meaning repeatedly to make sure that no one misses the point; its lessons, rendered even more explicitly than the ones in Conor's classroom, are missing only the chalkboard and pointer.

As the movie rumbled toward its inevitably devastating conclusion, the chief emotion I felt wasn't sadness but annoyance at the dashed grander potential.

Director J.A. Bayona presents appealing worlds (real and imagined) awash in color and detail, but while his movie and its monster are very interested in exploring and explaining humanity, they don't quite get people.

Too mature to lure in the younger set and too one-dimensional to make much of an impression on adult audiences.

This is a tough movie that takes on adult issues and doesn't shy away from the grim realities of its subject matter. But that's what makes this grim children's story work. It's a work of lovely darkness.

The viewing experience is unlike most other films with level of special effects. The monster featured here is one of those rare CG creations that actually seems to possess a soul.

A Monster Calls is absolutely essential.

The animation of the Monster's tales is astonishing, possessing a depth in colour and detail that quite literally takes your breath away thanks their beauty.

A beautiful tale of fantasy and tragedy that should be shown to kids nowadays. [Full review in Spanish].

Those easily prone to tears will most likely be unable to contain their emotions in this methodical drama which could best be described as a family friendly tearjerker.

Audience Reviews for A Monster Calls

An artistically gifted but bullied school boy has to deal with his mother's approaching cancer death and is visited by a tree monster a night. What sounds like a fantasy adventure is actually a pretty serious drama about children being confronted with loss. Especially the short stories the monster tells are beautifully animated and the protagonist is a highly talented young actor. One has to wonder who the audience for this is, though. Children will find it too dark and uneventful, adults may be put off by a CGI tree creature. Especially the ending is very touching, though.

Even though it boasts a great cast, stunning visual effects and a promising premise, A Monster Calls is too dark and a missing opportunity. Full review on filmotrope. com

Who is the audience for this picture? Maybe fantasy fanatics who want to recall their childhood or perhaps anyone who has gone trough a similarly traumatic experience and can identify with this young protagonist. A Monster Calls is artifice fabricated from gorgeous components. The CGI, the musical score, the animated tales are all beautifully put together. It is a visually inventive production. There's so much to recommend initially that it makes the ultimate denouement such a crushing disappointment., The hackneyed and commonplace ending doesn't justify all that came before it. We get the tear-jerky finale that we've been promised but it feels forced. I was indifferent. It goes through the motions of a sad ending, but we're missing the humanity. fastfilmreviews.com