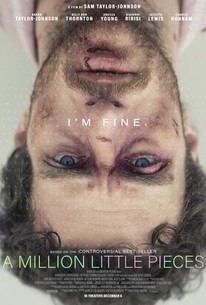 Critics Consensus: While solidly cast and competently helmed, A Million Little Pieces amounts to little more than a well-intentioned but unpersuasive echo of a deeply problematic memoir.

Critics Consensus: While solidly cast and competently helmed, A Million Little Pieces amounts to little more than a well-intentioned but unpersuasive echo of a deeply problematic memoir.

Critic Consensus: While solidly cast and competently helmed, A Million Little Pieces amounts to little more than a well-intentioned but unpersuasive echo of a deeply problematic memoir.

At the age of 23, James Frey woke up on a plane to find his front teeth knocked out and his nose broken. He had no idea where the plane was headed nor any recollection of the past two weeks. An alcoholic for ten years and a drug addict for three, he checked into a treatment facility shortly after landing. There, he found much more than traditional treatment. He found similar broken souls yearning and fighting for a better life. This is a story of recovery and love, a story of friendship and hope. This is an account of his six weeks in rehab.

Dark Waters Is Certified Fresh
The Indie Fresh List: Gwen and Aquarela Are Chilling, While John DeLorean Is Driven to Crime

As a stand-alone work of cinema fiction, "A Million Little Pieces" is an effective blunt instrument of a film - a rough-edged, unvarnished, painfully accurate portrayal of addiction and rehabilitation.

A petulant, boastful, and not very noteworthy variation of a story that plenty of films, documentary and fiction, have told before, but with more insight or panache.

An underwhelming addiction story that feels not just familiar, but more focused on the bad-boy swagger of its main character than his actual recovery.

Yet another ruin-and-rehab tale, one that initially tantalizes then flatly disappoints.

James' inner life and his experience is made up of a million little pieces, but in this flat film we get just one.

Making a recovery movie is like making a boxing movie: The formula is so well established that the most viewers can hope for is a slight variation on a familiar theme.

The Taylor-Johnsons have made a well-meaning version of a story about addiction, but given what we know about James Frey, A Million Little Pieces doesn't feel like enough.

... hampered by its reliance on clichés about addiction and rehabilitation that squander a committed lead performance by Aaron Taylor-Johnson.

I'm glad a film like A Million Little Pieces exists because it's a reminder that life with an addiction doesn't have to be hopeless.

If you're a fan of the book it's worth seeing, but the memoir is, unfortunately, a product of its time that's hard to adapt

This is a journey, troubling and perhaps dangerous but well-worth taking.

Not to downplay the experience of battling addiction, but "A Million Little Pieces" feels bland because it goes over the typical scenes of bodily decay and temper tantrums without giving the narrative a truly human backstory.

There are no featured reviews for A Million Little Pieces at this time.