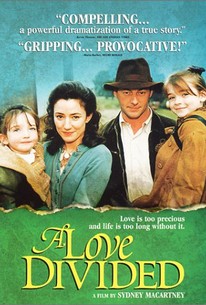 Based on a true story, A Love Divided chronicles the aftermath of Sheila's (Orla Brady) pledge to send her children to Catholic school. Raised Protestant, Sheila was forced to sign a contract obligating her to bring up her own children as Catholics when she was married into the religion, but years later she decides that no church will dictate the religion chosen for her kids. The dogmatic Father Stafford (Tony Doyle), however, is so relentless in his insistence that her children do, indeed, become Catholics, that Sheila is forced into kidnapping her own family. With both the highest levels of the Irish government and the Vatican after her, the potential consequences of not following the Catholic faith become increasingly surreal. Directed by Sydney Macartney, the film also features Liam Cunningham, Jim Norton, Peter Caffrey, and Brian McGrath. ~ Tracie Cooper, Rovi

Critic Reviews for A Love Divided

An Irish drama that's a lot more sly and a lot less straightforward than it appears on the surface.

Powerful indictment of the lengths human beings will go to to be right.

It's like a PBS version of a movie of the week about child abduction, complete with histrionic, spit-flecked speechifying in quaint Irish brogues.

A cautionary tale of the mischief that can happen when men no longer see their neighbors as human.

The gripping A Love Divided will leave you taking sides, whether or not that was the film's intent.

A tug-at-your-heartstrings weepie from the sledgehammer school of filmmaking.

Overplays its hand, with far too much melodramatic shouting from leads Liam Cunningham and Orla Brady.

Personal views aside, this small, well-crafted Irish production achieves importance by saying what it intends to say with both strength and conviction.

It fails to arouse much more than deep annoyance.

A 'thesis' film that will offend Catholics and stimulate considerable post-movie discussion.

Audience Reviews for A Love Divided