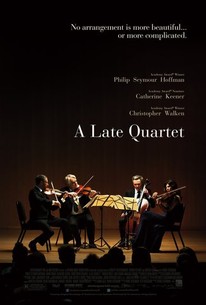 Critics Consensus: An outstanding ensemble cast lends weight and depth to A Late Quartet's melodramatic script, and the result is insightful and emotionally satisfying.

Critics Consensus: An outstanding ensemble cast lends weight and depth to A Late Quartet's melodramatic script, and the result is insightful and emotionally satisfying.

Critic Consensus: An outstanding ensemble cast lends weight and depth to A Late Quartet's melodramatic script, and the result is insightful and emotionally satisfying.

When the beloved cellist of a world-renowned string quartet receives a life changing diagnosis, the group's future suddenly hangs in the balance: suppressed emotions, competing egos, and uncontrollable passions threaten to derail years of friendship and collaboration. As they are about to play their 25th anniversary concert, quite possibly their last, only their intimate bond and the power of music can preserve their legacy. Inspired by and structured around Beethoven's Opus 131 String Quartet in C-sharp minor, A LATE QUARTET pays homage to chamber music and the cultural world of New York.

Andrew Yee
as Steve the Cellist

Nina Lee
as Herself

Alyssa Lewis
as Little Girl in Subway
View All

News & Interviews for A Late Quartet

View All A Late Quartet News

Critic Reviews for A Late Quartet

We can note immediately that Zilberman has the requisite gifts.

It is not flawless but it makes you watch, and listen, closely throughout.

It isn't great art, but it is patterned after great art, and there are worse ways to make a film than that.

Wants to be Bergman, ends up more like a burgundy-hued Sunset Beach.

A movie with clarity and grownup complexity.

Insightful and incandescent, this is a film for both music lovers and movie lovers.

Although the tone and pacing may not set the screen alight, A Late Quartet has sensitivity, sophistication and a strong, watchable cast ensemble.

A little more of that kind of restrained elegance and musical beauty may have freed the film from its somewhat stifling atmosphere.

Little more than a muddled cacophony of clichéd dramatic twists and transparent developments, somehow belying its eloquent and graceful leitmotif.

Surrounded by the unraveling lives of his longtime musical partners, the understated gravity that Walken gives this fading arts patriarch is a gratifying reminder that it's the quieter notes that are often the most resonant, onstage and off.

The unconvincing, histrionic script makes all of this seem more contrived than controlled.

A Late Quartet is a terrible film-it's like an idiots' Amour.

Audience Reviews for A Late Quartet

A quartet's leader falls ill as marital strife hits two other members. Essentially an acting master class, Philip Seymour Hoffman, Catherine Keener, and Christopher Walken all turn in remarkable performances that should be the model for any young actor. Walken, especially, in his later years continues to show a sensitive, emotional side. However, the film is poorly paced. Particularly, after a comic scene in which the stoic, severe Daniel is forced to gather his clothes and slip out the fire escape, we get another tear-ridden scene filled with pop psychology and emotional effusions. What is more, the character look like they've been crying or are about to cry is almost every scene. Overall, though I like the work by the actors, I think a skilled director could have turned this into a truly fine film.

Maybe I needed to be a classical music fan in order to enjoy this film. Wonderful actors. Nicely done..but I found the story slow, tedious, and rather pointless.

Movies about violinists aren't usually my thing, but looking over the cast I figured I would give it a shot. Phillip Seymour Hoffman, Christopher Walken, Catherine Keener, and Mike Ivanir star as a string quartet with a lot of drama. 1 is retiring because of Parkinsons, 2 are in a failing marriage, and the other is sleeping with the married couples daughter. It's all made for tv type of stuff, but the performances set it a few steps above. Hoffman shines most, but the rest all do very well. Overall, it is what you would expect. Slow and geared towards a much older audience. It's not a bad movie, but it's not a very entertaining movie either. I liked some parts of it, but was ready for it to be over halfway through. If you like classical music or are much older than 29, then you might like this. Otherwise, wait til your older.

A Late Quartet is a superlatively acted, well written, intense and downbeat melodrama. It's quiet and heartfelt, though probably too intellectual and pretentious for the escapist movie goer, or if you feel like a romp where you can turn your brain off at the movies, don't go (or rent). It's the story of the labyrinthan and conflicting relationships between the members of a veteran string quartet, with loyalty, jealously, sex, and ambition pushing the envelope on everything. The catalytic event is a diagnosis of Parkinson's disease, forcing the retirement of the groups cellist father figure, played by Christopher Walken. Every performance is a gem, but Christopher Walken is a revelation, since he usually plays weird over the top surreal clowns (albeit compellingly each time). Here he plays a real man, facing death and decline with his whole heart and soul on display. P.S. Hoffman does his usual angst filled disapointment filled character with his usual skill, as his wife, Catherine Keener gets to do a more muted but well calibrated take on on her bitchy brutally honest but soulful charcter, Israeli Mark Ivanir plays the star lead violinst, a distant, arrogant but alpha male with sensitivity, I haven't seen him before in anything. English up and coming Imogene Poots plays the daughter of the couple, who enters into a sexual relationship with Ivanir (his mother's old flame) causing the group to almost flame out. As much as I loved it, be warned the movie involves lots of talk about Beethoven and classical music that may bore some viewers (I loved it). Further, the film which feels very real most of the time, depends on French Farce like coincidences and meolodramatic over the top tropes to advance its story, which may annoy some viewers hooked up on realism. First time feature writer/director Yaron Zilberman does a wondeful job here, and I look forward to his next film. Finally, the wonder that is Beethoven's opus 131 is the star of the show, and its melancholic, mournful yet life affirming strains are lived up and matched by this terrific chamber film.