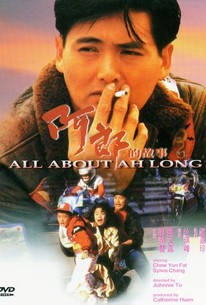 All About Ah Long Photos

Future action spectacular maestro Johnny To spins this melodrama based loosely on divorce drama Kramer vs. Kramer. Former motorcycle racer Long (Chow Yun-fat) supports his young son Porky (Wong Kwan-yuen) working as a lowly construction worker. Though they struggle to get by, Long and his son live happily. One day, Sylvia (Sylvia Chang) -- the kid's mother -- shows up after an extended stint in America. A successful ad exec, she casts her son in a television commercial she is producing. Soon Sylvia's long-dormant maternal feelings come rushing to the fore. A flashback shows that Sylvia dumped Long when she discovered Long with another woman. Her mother told Sylvia that her child was born dead before her mom fobbed him off onto Long. Deciding that Long with his crude ways and blue-collar income would be a poor influence on her son, Sylvia tries to get Porky to come back with her to the States. Porky resists and vows to help his dad try to restart his racing career. Chow Yun-fat won a Golden Horse for his acting performance in this movie.

Critic Reviews for All About Ah Long

There are no critic reviews yet for All About Ah Long. Keep checking Rotten Tomatoes for updates!

Audience Reviews for All About Ah Long

This hard-to-find Chow Yun-Fat golden classic is one of his early and best film. (This is the film got him famous in Taiwan.) A bike racer who has fallen and got lost in his ways but at the end he decided to pick up his bike again and enter a race. Unbelieveable and memorable twist. A must watch.

All About Ah Long Quotes