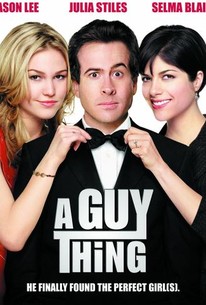 Critics Consensus: Wasting the talent of its leads, this predictable romantic comedy relies on cheap laughs.

Critics Consensus: Wasting the talent of its leads, this predictable romantic comedy relies on cheap laughs.

Critic Consensus: Wasting the talent of its leads, this predictable romantic comedy relies on cheap laughs.

A man trying to save his relationship with the woman he loves finds himself sinking into a quicksand of small lies and half-truths in this comedy. Paul (Jason Lee) is a regular guy who is engaged to marry Karen (Selma Blair); while Paul loves Karen, he's more than a bit nervous around her family, even though her father (James Brolin) has already given him a job in the family business. Shortly before the wedding, Paul's friends throw him a bachelor party, complete with a boatload of liquor and a squadron of grass-skirt-clad tiki dancers. Paul strikes up a conversation with one of the dancers, the cheerful if inept Becky (Julia Stiles), and the next morning, he wakes up bleary-eyed with a massive hangover -- and Becky in bed next to him. Paul soon receives a phone call from Karen saying she's stopping by for a visit, and Paul scrambles to get Becky out of his apartment. Paul attempts to explain some incriminating evidence with a few white lies, but a messy situation gets messier when Paul runs into Becky at a pre-wedding family get-together...and discovers she's Karen's cousin. A Guy Thing also features Shawn Hatosy, Lochlyn Munro, and Julie Hagerty.

Will Sanderson
as Bachelor Party Guy

John B. Destry
as Angry Driver

Enid-Raye Adams
as Maid of Honor

Andy Thompson
as Guy in Washroom

Shawn Bordoff
as Guy on Sofa

Jared von Snellenberg
as Guy on Moped
View All

Critic Reviews for A Guy Thing

If you ever admired Julia Stiles, Selma Blair and Jason Lee -- and who didn't? -- don't watch them crush their careers in this laugh-free romantic comedy from the director of Snow Day.

The three move through a faded deck of clichés ... with a convincing impression of having fun, helped along by a snazzy '60s-'70s soundtrack and bit-part fillips.

Here's a rule of thumb: If the coincidences in your movie have longer odds than Carrot Top perfecting cold fusion, you might be straining the old believability factor.

It takes a truly awful motion picture to nullify the considerable appeal of Lee, Stiles, and Blair, but A Guy Thing has what it takes.

A truly dire thing and a waste of good populist talent.

Everything in A Guy Thing is slightly off.

Cycles through the same old cliches, like squares accidentally being dosed with drugs, overzealous pharmacists blaring out sensitive medical information (nothing like a good ol' venereal disease joke), and climactically scotched weddings. [Blu-ray]

Would feel a lot emptier without the lively actors populating it.

I can't imagine this painfully unfunny and often boring movie being a 'thing' for guys or gals.

Audience Reviews for A Guy Thing

Has its moments, in particular, the crab scene in the pharmacy, but not the best, honestly. I like both Julia and Selma, but it's not a career highlight for either. Kind of dark and dim looking with the filming and has a very b grade/straight to dvd feel.

Forgetable and not that great! Got bored throughout the film!

not a bad movie has some funny moments!

Don't let the title fool you because this film's for guys and girls. A brilliant cast with Julia Stiles and Jason Lee starring in a hilarious, romantic tale of meeting the right person close to a wedding with the wrong one, and all of the complications that arise due to the fact that she's his fiance's cousin. Memorable gags and running jokes that never grow stale.