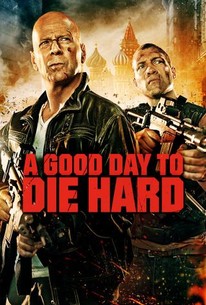 Critics Consensus: A Good Day to Die Hard is the weakest entry in a storied franchise, and not even Bruce Willis' smirking demeanor can enliven a cliched, uninspired script.

Critics Consensus: A Good Day to Die Hard is the weakest entry in a storied franchise, and not even Bruce Willis' smirking demeanor can enliven a cliched, uninspired script.

Critic Consensus: A Good Day to Die Hard is the weakest entry in a storied franchise, and not even Bruce Willis' smirking demeanor can enliven a cliched, uninspired script.

Zsolt Vicei
as Laundry
View All

News & Interviews for A Good Day To Die Hard

View All A Good Day To Die Hard News

Critic Reviews for A Good Day To Die Hard

This is the fifth and least of the Die Hard movies.

I didn't think it was physically possible to doze off at a movie as loud as A Good Day to Die Hard, but for a few moments my mind found some distant, peaceful refuge.

It's all more than a little silly, but Willis' presence at least provides undercurrents of easy jocularity.

For anyone who remembers the "Die Hard" adventures at their vital and exciting best, this film feels like a near-death experience.

Few fans of the series would disagree that this sclerotic fifth installment should probably be the last.

This is not John McClane. This is a sad old man trying to reconnect with his estranged son, and failing to make me believe it.

A Good Day to Die Hard's grossest sin is that at no point does it feel like a Die Hard movie.

For people who are fans of the Die Hard films and/or Willis' action persona, or those somehow unfamiliar with either but fond of the genre, A Good Day To Die Hard will be a good time at the movies.

It's always fun to hang with John McClane for a day, at least from the comfort of the cinema. But this trip doesn't merit a "yippee-ki-yay."

A Good Day To Die Hard faces one huge obstacle which it can't overcome - the shadow of the original Die Hard.

Audience Reviews for A Good Day To Die Hard

I cant believe I liked this movie the first time i saw it, probably because i was so excited for another die hard film that i was totally ignoring every little detail that made the movie bad and excepted it, but in the end its escapism but sadly there is no escape from this new chapter in the series, which should be titled Death of a Franchise. It's too fast-paced, the plot is always unclear, Jai Courtney and Bruce Willis have no chemistry what so ever and it feels like a season of 24 with John McClane as a backup character. The most memorable action sequence is near the conclusion and the ending is the only satisfying part of this film. A very rushed piece of work with no plausible villain and just takes a steaming dump of the franchise

Some people felt Live Free or Die Hard was a low point for the series, and that it really didn't fit in with the rest of the films. Who would have thought that it could have gotten worse. For the record, I like the fourth Die Hard film, despite its flaws and ridiculousness. But yeah, what we have here is the true low point for the series. It's really not even a Die Hard film. Maybe just going by the name and the inclusion of John (and technically, Jack) McClane, but that's about it. This is basically just a dumb, typical action movie that happens to have John McClane in it. He's not even really the focus. The film has no real reasons for existing, but the plot our beloved McClane gets shoehorned into sees him going to Moscow to rescue (or so he thinks) his estranged imprisoned son, only to find himself caught up in a CIA mission to thwart terrorists bent on nuclear weapons based domination lead by none other than his own son. Seriously. That's the plot. There's no reason for the older McClane to be here. He's not a cop in this one, just a tourist who happens to be an ass kicker. They try to balance the action with a father/son dynamic, but it's not very original or compelling, and even the action is rather blah and uninspired. It's also executed and edited rather choppily, so I had no idea what was going on most of the time. The film does mark a return to R rated territory, but it feels forced. The action is really just strong PG-13/very light R rated stuff, and yeah, there's some strong language, but it sticks out, and feels like they added just enough swearing to earn this an R rating just to appease fans. The film's treatment of Russian culture, history, and geography, as well as it's portrayal of how nuclear radiation works (the climax is at Chernobyl), is all very shallow, annoying, and wrong. Yeah, I basically hated this movie. This is a rare thing for me in general, but especially for something like this. There's really nothing all that spectacular here. Sure, I did enjoy the explosions, but that's just because I always find something to like with every movie I see, even dreadful crap like this. Here's to hoping they finally end this series already, or at least redeem themselves drastically if they feel the need to make another one.

They should have stopped officially at 3 but although 4 was enjoyable its annoying directors milk a good idea and make it terrible. This fifth installment is amusing and explosive but theresnot much to it to make it that awesome Action packed movie it was back in the 80's when the original began!

this is honestly one of the worst films in the history of cinema. there is zero story. the film managed to take one of the most distinct and prominent characters in the history of action films and mute him almost entirely. mcclane stumbles through the film, saying little, doing less, and the film as a whole offers nothing by way of interest. half of moscow was destroyed, with zero clarity as to what was actually going on and why any of it mattered.