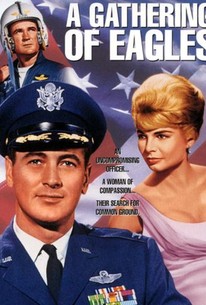 Commander Jim Caldwell (Rock Hudson) is slated for duty at a U. S. Air Force base. His mission is to whip a bunch of irregular regulars into a Strategic Air Command unit. The arrival of the new commander leads to a shake up of personnel beginning with the dismissal of the alcoholic Colonel Fowler (Barry Sullivan). The men resent their new leader but eventually respond and respect him with urging from airman Hollis Farr (Rod Taylor). The dedicated Caldwell experiences battles at home from wife Veronica (Mary Peach) and is forever tethered to the "red phone." The commander must not be any longer than six rings away from the crimson hotline in case of a national emergency. Caldwell stretches himself thin trying to please wife, family, and his duty to his command unit and country in this predictable exaltation of the virtues of the U. S. Air Force.

John Davidson
as Hadley
View All

Critic Reviews for A Gathering of Eagles

Not even the presence of Hudson and Taylor serves as justification for enduring the endless length of the film. [Full Review in Spanish]

It's as dull and routine as it sounds, and only occasionally soars.

There are no featured reviews for A Gathering of Eagles at this time.

A Gathering of Eagles Quotes