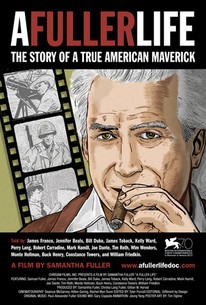 Critic Reviews for A Fuller Life

A creative and rousing adaptation of Samuel Fuller's superlative autobiography, made by his daughter.

A Fuller Life is a cigar-chomping swagger through the life of an independent filmmaker from a time before the term "indie" had entered common parlance.

There has already been one very good documentary about the maverick American director Sam Fuller... This new film, made by his daughter, Samantha Fuller, covers similar terrain but in a much more personal way.

It adds up to a rich portrait of an extraordinary man, half-tortured artist, half cigar-chomping action hero.

Writer, director, reporter, soldier, lover, father and lifelong outsider: the title of this warm doc about the legendary Samuel Fuller pretty much sums it up.

A loving and illuminating documentary about an American original, Samuel Fuller.

Whilst the surrounding film is a little rough-and-ready, the core dialogue between auteur and audience encapsulates the kind of penetration and energy inherent to [Samuel Fuller's] oeuvre.

A Fuller Life is too small and too celebratory to contain analysis -- and the unpretentious Fuller would have thanked God for that, whatever he might have said to himself. Nonetheless, it's a solid primer about a remarkable man's journey.

If [Samantha Fuller's] film inspires more people to seek out Fuller's work, however, that will be more than enough.

If you are already a fan of Samuel Fuller's uncompromising pulp cinema, you'll be delighted by this new documentary tour covering the life and career of the director,writer, and producer.

Cinephiles and history (especially WWII) enthusiasts will find a lot to like in the film. Fans of Fuller (we are legion) will have their appetites lightly whetted.

Built around readings of Fuller's writing by the likes of Mark Hamill, Bill Duke, William Friedkin, and Joe Dante, this documentary from Samantha Fuller tells the story of her father's life in his own words.

Audience Reviews for A Fuller Life

There are no featured audience reviews yet. Click the link below to see what others say about A Fuller Life!