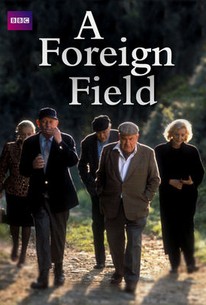 In this sentimental comedy, two British World War II veterans (played by English stage and screen veterans Sir Alec Guinness and Leo McKern) have come back to Normandy together to revisit the site of their most harrowing wartime experiences, to look up the gravesite of a fallen comrade, and to look up the prostitute (Jeanne Moreau) who put joy back into their lives. At their hotel, they meet Waldo (John Randolph), an American veteran, who is on a similar mission. Unlike them, however, he is saddled with the company of his disagreeable daughter and her stuffy husband (Geraldine Chaplin and Edward Herrmann) who think they are doing him a favor by coming with him. One highlight of the film is Moreau's rendition of the Edith Piaf classic, La vie en rose. ~ Clarke Fountain, Rovi

Critic Reviews for A Foreign Field

It's not great filmmaking. But it is all warm and effective and with more acting talent on display than you're likely to encounter in any three movies.

Conceived as a star vehicle for Alec Guinness, this is a painfully slow, embarrassingly sentimental melodrama about WIII vets revisiting the site of their combat at its 50th anniversary; cast which also includes Jeanne Moreau and Lauren Bacall can't help

Audience Reviews for A Foreign Field

There are no featured audience reviews yet. Click the link below to see what others say about A Foreign Field!