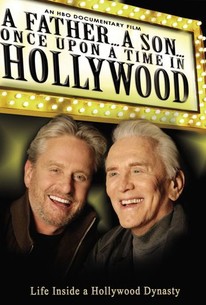 The rich legacy of cinema legend Kirk Douglas is explored in Academy Award-winning actress and documentary-filmmaker Lee Grant's illuminating look at the personal side of a Hollywood royalty. With roles in such indisputable Hollywood classics as Spartacus, Kirk Douglas achieved the kind of cinematic superstardom that dreams are made of. As the torch was passed to his talented son Michael in such efforts as Romancing the Stone, Wall Street, and Basic Instinct, it became obvious to filmgoers that the Douglas dynasty would continue to thrive. Now, for the first time ever on camera, filmmaker Grant conducts exclusive interviews with both Kirk and Michael, their friends, and various family members to offer the definitive look at both the public and private lives of the father and son who made Hollywood history.

Critic Reviews for A Father...a Son...Once upon a Time in Hollywood

There are no critic reviews yet for A Father...a Son...Once upon a Time in Hollywood. Keep checking Rotten Tomatoes for updates!

There are no featured reviews for A Father...a Son...Once upon a Time in Hollywood at this time.