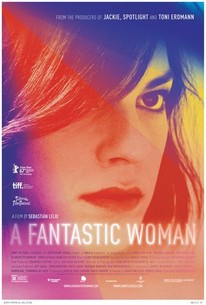 Marina (Daniela Vega), a transgender nightclub singer, comes under suspicion when her much older lover Orlando (Francisco Reyes) dies suddenly. After being harassed and threatened by her late boyfriend's vengeful relatives and the police, she must defend her rights as both Orlando's partner and as a human being.

Vega's performance is riveting, but writer and co-director Sebastián Leilo's use of sex and gender to shape his narrative is straight out of a '50s melodrama.

A Fantastic Woman asks us to embrace all things fluid and, thanks to the superstar at its centre, it's a pleasure to go with the flow.

The director's empathy for the indignities of female solitude remains very much his strong suit.

Fantastic is one word for it, another would be outstanding.

An exquisite melodrama about the extremes of love and grief and familial conflict that also, when you're least expecting it, packs a hefty political wallop.

When the screen went dark prior to running the final credits, I assumed for an instant that some small initial section had come to a close. In fact, an hour and three quarters had gone by.

[Daniela] Vega is incredible in all of these scenes, fully occupying the screen with a presence that oscillates from fury to the stark horror of grief.

A Fantastic Woman is a superb character study and a severe indictment of a society that's more hypocritical than open-minded.

Vega's performance is a prize for anyone who sees this timely, ground-breaking and moving portrait.

The film may be groundbreaking in terms of getting attention for community that continues to be misunderstood, but it is the truth with which grief, which is universal, is represented, that audiences will find the greatest, and lasting, connection.

A simmering, elegant knockout of a film and must be seen.

As usual, the Academy Awards left me a bit incensed over its proclivities towards mediocrity. It's not that I expect everyone in the world to agree with me or that Phantom Thread SHOULD HAVE WON EVERYTHING, it's just that for all of the pomp and pizazz that is put into production, you'd think an industry that thrives on "perfectionism" and presentation would have some quality control. After seeing The Shape of Water (or Progressivism as Fish-Sex: A Gratuitous Teal Metaphor) win best picture and Gary Oldman win best actor for wearing a fat suit and portraying a war criminal, I'm left a bit indignant. So, it's all the more rewarding when something with the qualities of "aesthetically pleasing" and "intellectually stimulating" align properly, as in the case of this years' best foreign film winner A Fantastic Woman. This Chilean trans drama is not only beautifully shot but a riveting emotional journey through different societal perspectives on identity (class, gender, and self, primarily). Daniela Vega plays Marina, a singer and waitress who is in love with Orlando (Fransico Reyes). They are about to move in together, but Orlando has an aneurysm and dies, leaving Marina's life in limbo. It's complicated more so by Orlando's family's bigotry and preconceptions of her in the ensuing mitigation of his estate and funerary arrangements. Just as Orlando's family is suspicious of her, Marina is constantly on guard and trusts almost no one - and with good reason. Everyone she encounters throughout the ordeal, Orlando's ex-wife, medical staff, cops, regard her as a "chimera", a "perversion", and a "faggot". They live in a "normal" world. It's a dull world filled with dull colors and sharp lines of contrast dividing what is from what shouldn't be. Her world is a colorful and open place filled with music, but it's desperate and scary at times. When forced to confront what society thinks she should be, it seems to bring something greater out of her. The masculine, aggressive qualities she has wanted to suppress and forget in her world help balance and empower her character. Without spoiling anything, this all culminates into a fantastic, but nevertheless real, becoming for Marina.

Sebastián Lelio is becoming now one of my favorite directors, and Daniela Vega delivers a magnificent performance in this complex and enraging drama that makes us share all the suffering and humiliation that the character is put through by so many people around her.