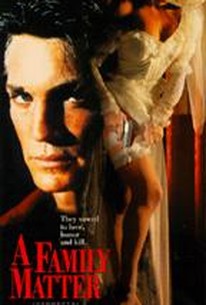 Originally titled Vendetta: Secrets of a Mafia Bride, this 2-part TV movie stars supermodel Carol Alt as Nancy, the ward of Mafia don Frank Latella (Eli Wallach). Part One gets off to an explosive start when Nancy witnesses her father's murder. Raised by Latella, our heroine lives for the day that she can avenge her dad's death. Little does she know that her own fiancé (Eric Roberts) was the man who pulled the trigger. Syndicated to local TV stations, Family Matter was first made available on May 13, 1991.

Thomas Calabro
as Nearco
View All

Critic Reviews for A Family Matter

There are no critic reviews yet for A Family Matter. Keep checking Rotten Tomatoes for updates!

There are no featured reviews for A Family Matter at this time.