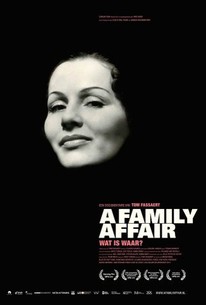 On his 30th birthday, Tom Fassaert receives a mysterious invitation from his 95-year-old grandmother Marianne. out of the blue she asks him to come to South Africa to help her with her will. At that time the only thing he knows about her are the myths and predominantly negative stories his father told him. She was a femme fatale who went through countless men, a famous model in the 1950s who put her two sons into a children's home. And a mother who suddenly decided to emigrate to South Africa, far away from the rest of her family. Fassaert decides to accept her invitation, but not without bringing his camera along. Through his lens we discover what lies behind persistent myths and why she still has such a huge influence on the family. But when he himself becomes the object of her obsession, his venture becomes much more complicated than he could ever have imagined.

Critic Reviews for A Family Affair

You aren't sure whether you are witnessing an investigative family chronicle or an act of revenge.

[An] intimate, sometimes painful documentary ... demonstrates what a Sisyphean task seeking the truth can be.

It's a potent psychodrama, pitting Marianne's reality against the one Fassaert is documenting. And who's to say which one is real?

A Family Affair is proof that healing emotional wounds and traumas can often be more impossible than physical injuries.

It's a mystery with no solution, only a handful of clues and a smoking gun.

an unexpectedly harrowing family chronicle, dredging up some painful history and recording more as it's being made

A Danish documentary about the director's conflicted 95-year-old grandmother who loves being the center of attention.

The film gives the impression of being transmitted from someone's memory, or a journal comprised of unorganized entries.

Audience Reviews for A Family Affair

There are no featured audience reviews yet. Click the link below to see what others say about A Family Affair!