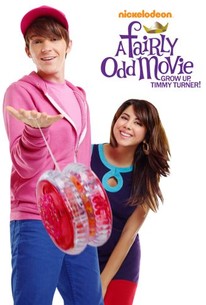 Nickelodeon's hit animated series makes the leap to the big screen, and gets a live-action makeover in this feature that finds Timmy Turner all grown up but still mischievous as ever. Fearing that his fairy godparents will disappear if he admits his true age, 23-year-old Timmy (Drake Bell) shuns adulthood to remain in the fifth grade. Timmy's arrested development comes up for parole, however, when the once-geeky Tootie (Daniella Monet) returns home as a beautiful young woman, and finally catches his eye. But as much as Timmy wants to grow up and win Tootie's heart, he can't help but fear that Cosmo (Jason Alexander) and Wanda (Cheryl Hines) will vanish along with his inner child if he chooses the path to adulthood. Later, as Timmy struggles to make a decision, charismatic oil tycoon Hugh J. Magnate (Steven Weber) shows up in town seeking to nab the fairies and harness their power to fuel his thriving empire.

There are no critic reviews yet for A Fairly Odd Movie: Grow up Timmy Turner. Keep checking Rotten Tomatoes for updates!

A ludicrous, nonsensical plot which lacks the wit and charm of the television series paired with amateur actors down on their luck does not spark a magical experience.

I grew up watching the cartoon show and was expecting a live-action movie released in theaters, but instead it was released on tv and boy was I excited and I saw it last night when it premiered. I know it wasn't Toy Story 3, but it had the same message about growing up. Here's my opinion. The storyline had a few problems and the dialogue was kind of pathetic, but the moments in this movie were actually faithful since they had the same actors from the TV show (except Tara Strong for obvious reasons) and it was great to see the live-action Timmy (played by Drake Bell) and the rest of the characters. The acting was solid, the music was a lot of fun, and the action scenes were very good. A Fairly Odd Movie: Grow Up Timmy Turner isn't my favorite tv movie, but it is a very good one and it's definitely worth seeing. 7/10

Well it's not Toy Story 3, but it had the same melancholy, exciting, yet heartbreaking message of growing up all the same. I thought going in, growing up with the cartoon and hearing about this months ago, that I would either love this adaptation or abhor it, it wouldn't just be "ok". I thought it was a fair yet slightly predictable homage to most of the notable characters, and an exciting end to the Timmy Turner legacy. It also had surprisingly good acting. But take a note Nick, after this, making more Oddparents episodes is now pointless. We all know now what happened in the end. Continuing the franchise would just overflow the barrel of the entire story.