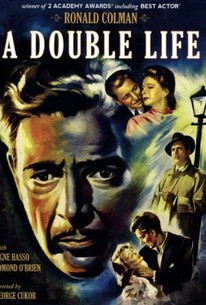 Ronald Colman won an Academy Award for his portrayal of an off-the-beam actor in A Double Life. A beloved stage star, Anthony John (Colman), has problems with his private life due to his unpredictable outbursts of temper. This trait has already cost him his wife, Brita (Signe Hasso), and threatens to sabotage his career. Nonetheless, Anthony makes his peace with Brita, and the two actors star in a new Broadway staging of +Othello. The play is a hit, running over 300 performances, but the pressures of portraying a man moved to murder by jealousy takes its toll on Anthony. In a fit of delirium, he strangles his casual mistress, Pat (Shelley Winters), but retains no memory of the awful crime. Press agent Bill Friend (Edmond O'Brien), unaware that Anthony is the killer, uses Pat's murder as publicity for +Othello. Anthony becomes enraged at this cheap ploy, and attacks Friend. At this point, Anthony realizes that he has been living "a double life" and is in fact Pat's murderer. A Double Life was written for the screen by Ruth Gordon and Garson Kanin, who occasionally digress from the melodramatic plotline to include a few backstage inside jokes.

Bruce Riley
as Man at Party

Wayne Treadway
as Man at Party

Mary Worth
as Woman in Audience

Janet Manson
as Girls in Lobby

Augusta Roeland
as Girls in Lobby

Ethel May Halls
as Woman

Don McGill
as Man at Party

Leslie Denison
as Actor in 'Othello'

David Bond
as Actor in 'Othello'

Virginia Patton
as Actor in 'Othello'

Thayer Roberts
as Actor in 'Othello'

Percival Vivian
as Actor in 'Othello'

Boyd Irwin
as Actor in 'Othello'

Fay Kanin
as Actor in 'Othello'

Frederic Worlock
as Actor in 'Othello'

Elliott Reid
as Actor in 'A Gentleman's Gentleman'

Georgia Caine
as Actor in 'A Gentleman's Gentleman'

Critic Reviews for A Double Life

It was the role of a lifetime, for any actor, but Colman got it, and he nailed it. He won an Oscar and a Golden Globe, and he deserved them.

Ronald Colman won a Best Actor Oscar for his ornate and hammy performance as an obsessed matinee-idol stage actor cracking up before our eyes.

Cukor's first teaming with writers Ruth Gordon and Garson Kanin draws on the professional hazard of actors who fail to distinguish between their lives on stage and off; Ronald Colman won the Oscar for this part.

Audience Reviews for A Double Life

Coleman allegedly pulls this one of his hat for an Oscar win at the end of his career but I wasn't terribly impressed. Silly at times.

An actor gets too involved in his roles and eventually looses himself in the role of Othello. Colman gives a great performance in this movie.