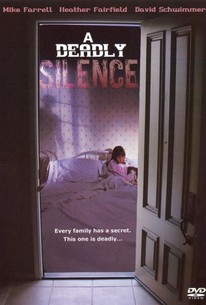 Made for TV, A Deadly Silence was based on the book by New York Times reporter Dena Kleiman. It is the doleful story of Long Island teenager Cheryl Pierson (Heather Fairfield), who in February of 1986 orchestrated the murder of her electrician father James Pierson (Charles Haid). The film does not argue that Cheryl was innocent. It does, however, delve into the deep waters of "extenuating circumstances". With the utmost taste and discretion, A Deadly Silence reveals that, four at least five years, Cheryl had endured sexual abuse at the hands of her father. Over and above the basic story, the film explores the "deadly silence" of incest-a silence often maintained not only by the victim, but by friends and family members who don't want to cause "trouble". Mike Farrell, Richard Portnow, Jeff Corey and Sally Struther costar, while future Friends regular David Schwimmer essays an important minor role. A Deadly Silence premiered April 16, 1989.

Critic Reviews for A Deadly Silence

There are no critic reviews yet for A Deadly Silence. Keep checking Rotten Tomatoes for updates!

There are no featured reviews for A Deadly Silence at this time.