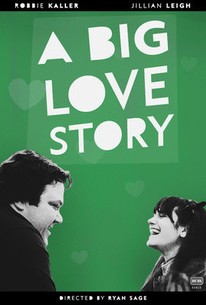 Love blossoms between a morbidly obese bowling alley attendant and a chain-smoking physical-fitness trainer in this romantic comedy that proves love is blind. Athletic Sam (Robbie Kaller) was on the fast track to becoming an NFL star when his mother died, and a severe injury ended a promising career on the gridiron. In the years that followed, Sam's weight skyrocketed as he fell into a deep depression. Sam had all but given up on meeting women when his roommate Miles (Tommy Snider) made a wager to see who could drop the most weight in the shortest time. Determined to get back in shape and on the market, Sam heads to the local gym and crosses paths with Cassie (Jillian Leigh), a gorgeous trainer who puts a sparkle in his eyes. When Cassie asks Sam out in a bid to raise her boyfriend's ire, the date goes better than either could have expected. Subsequently convinced they share a real connection, Sam accidentally makes a fool of himself when he attempts to ask her out again, and ends up stumbling right into her boyfriend's marriage proposal when he tries to set things right. When Cassie accepts, Sam is heartbroken. But Sam isn't about to give up just yet, and as Cassie prepares to say "I do" to Mr. Wrong, a fierce romantic rivalry starts to heat up.

There are no critic reviews yet for A BIG Love Story. Keep checking Rotten Tomatoes for updates!

There are no featured audience reviews yet. Click the link below to see what others say about A BIG Love Story!