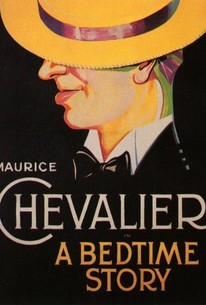 This musical comedy stars Maurice Chevalier as (what else?) a Parisian playboy with a song and a kiss for every beautiful woman in sight. His libertine ways are stemmed when Chevalier finds himself saddled with an abandoned baby. Because he is perceived to be the father of the infant, Chevalier finds his lovemaking activities severely diminished. At fadeout time, Chevalier finds lasting romance with Helen Twelvetrees, the baby's governess. Though he was probably uncomfortable sharing scenes with a scene-stealing toddler, Chevalier manages to deliver his usual sly, winking performance. A Bedtime Story was the screen debut for Baby LeRoy (later W.C. Field's perennial nemesis), playing (again, what else?) the troublesome baby. The film is based on Roy Horniman's story Bellamy the Magnificent, which had previously been filmed as A Gentleman of Paris (27).

Paul Panzer
as Concierge
View All

Critic Reviews for A Bedtime Story

[Maurice] Chevalier's latest movie, A Bedtime Story, might as well have been an animated cartoon; might better have been, in fact.

There are no featured reviews for A Bedtime Story at this time.