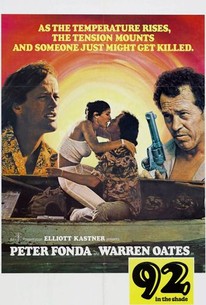 92 in the Shade Photos

Though set in Key West, Florida, a goodly portion of 92 in the Shade was filmed in England. Peter Fonda plays Tom Skelton, a bum who gets a job as a fishing guide in his old home town. Nobody wants to have anything to do with Skelton, least of all rival guides Nichol Dance and Carter (Warren Oates and Harry Dean Stanton). Faced with financial disaster and widespread hostility, he turns to his wealthy grandfather Goldsboro (Burgess Meredith) for help. Taking time off from his lovemaking sessions with sexy secretary Bella (Sylvia Miles), his grandfather pumps some money into Tom's operation, and our hero makes his peace with Carter. A climactic fight with Nichol puts an end to that problem, while Tom's romantic relationship with Miranda (Margot Kidder) helps him sort out his priorities. Director/writer Thomas McGuane adapted the script from his own novel.

Scott Palmer
as Michael
View All

Critic Reviews for 92 in the Shade

Where other movies fear to tread, 92 in the Shade goes full force, and that energy is both its most interesting aspect and its most serious defect.

There are no featured reviews for 92 in the Shade at this time.

92 in the Shade Quotes